The Way You Cut a Grape Could Save Your Child's Life

Find out how this happened and how you can prevent this from happening to your child.

Toddlers love eating grapes, but we all know the danger that is posed to a child’s life if he swallows a whole grape.

This is what mum Sophie Jackson realised when her toddler almost died recently after swallowing two whole grapes.

In a Facebook post, Sophie said that ever since she heard of the death of British toddler Jacob Jenson who suffocated on a grape, she had been extra careful about cutting grapes up for her own son, Jake.

But on Friday 13 November, the little boy managed to get hold of and swallow a couple of grapes before they had been cut.

And he started choking. 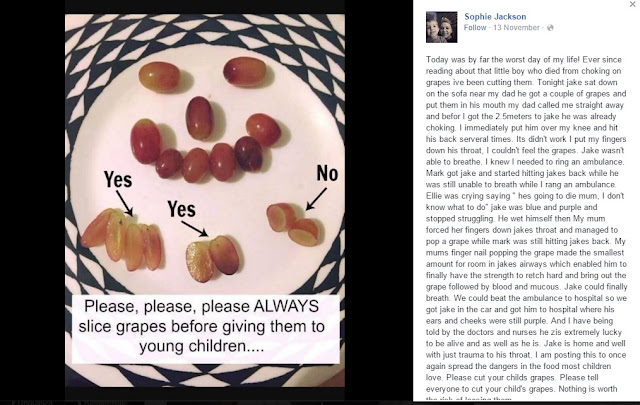 Sophie describes the moment she almost lost her little boy:

“I immediately put him over my knee and hit his back several [sic] times. It’s [sic] didn’t work I put my fingers down his throat, I couldn’t feel the grapes.

“Ellie was crying saying ” he’s [sic] going to die, mum, I don’t know what to do” Jake was blue and purple and stopped struggling. He wet himself then…”

After this, Sophie’s mother had forced her fingers down the little boy’s throat and managed to pop a grape with her fingernails while Jake’s dad Mark, was still hitting his son’s back.

It is believed that because of the grape being “popped” by Jake’s grandmother’s fingernail, a small amount of space was made in Jake’s airway which enabled him to retch and expel the grape, along with blood and mucous.

He could finally breathe.

Sophie was told by doctors upon reaching the hospital that Jake was very lucky to be alive. The little boy is now okay, his mum says, and only has some trauma to his throat.

Earlier this year, toddler Jacob Jenkins passed away in the hospital — five days after choking on a grape in a Pizza Hut restaurant in Hartlepool, England.

According to reports, Jacob Jenkins was brought to the Royal Victoria Infirmary in Newcastle, where he was put into an induced coma. The child stopped breathing half an hour after he swallowed the grape on Friday (9 Oct).

The toddler’s parents made the decision to switch off his life support on Wednesday (14 Oct).

A Pizza Hut spokeswoman said that they have “removed grapes from the menu with immediate effect”.

As parents, we are always trying to find ways to get our kids to eat their fruits. But we must be very careful when it comes to the size of the fruit they are being fed, especially when the child is still very young.

Cut your grapes into halves or quarters. Always cut your grapes before feeding them your child, and remember to remove the seeds if any

Age does not matter. It doesn’t matter if your child can already chew his/her food properly. Grapes are the perfect size to block a child’s windpipe. Once the grape is stuck, the airway will be blocked completely.

Educate caregivers. In a situation where your child is left in the care of someone else, teach them about choking hazards and precautions to take to prevent choking. Identify emergency resources and contacts.

Watch this video below to learn how to save a choking baby.