The Well-Meaning Advice No Mum Ever Needs To Hear

"I’d love to say that was the only time someone drew a line between my stress and my children’s shortcomings but it’s happened several times since then."

I’ll never forget the first time I heard it.

My first child was about six months old and I hadn’t slept more than three straight hours since she was born. I was constantly trying to settle her by singing soothing songs, shoving a boob in her mouth or rocking her. Birds kept trying to build nests in the bags under my eyes.

One day, a well-meaning friend came over to keep me company. That’s when she unleashed the bomb. “You know…” she said in a tone that indicated she considered herself the Dalai Lama of infant sleep. “She can probably feel that you’re stressed and that’s why she’s not sleeping well.”

Wait, WHAT?! I felt my face start to twitch as my brain processed her words. Was she implying I was the reason my child wasn’t sleeping well?!

Did she think that pointing out my stress would help in any way? Was it supposed to miraculously dissolve all my worries and make my baby sleep eight hours straight?

Well, it didn’t. It just increased my stress tenfold because there was a big serving of mum guilt heaped on top. If only that was the last time I heard it…

I’d love to say that was the only time someone drew a line between my stress and my children’s shortcomings or bad behaviours over the years, but it’s happened several times since then.

By this point, you might be wondering, “Errr, just how stressed is this Sabrina person anyway?!”

I won’t try to pretend I’m a Zen master, but I think my stress levels are pretty average for a mum who had three kids (including twins) in less than three years.

My big girl is now six and my twin girls are three and a half. I’m happy to report that life is finally getting easier, but it was touch and go for a few years.

We live far from our families, so I got almost no help and very little sleep as I tried to juggle work and three babies. Sure, I may have looked like a frazzled hot mess some days, but overall I think I kept it together pretty well.

So, what on earth would possess someone to tell me, as I melted into tears after leaving my toddler twins crying hysterically at daycare one morning, “They probably sensed your stress and fed off it.”

REALLY?! Why don’t you just stab me in the heart with a Barbie doll, lady? 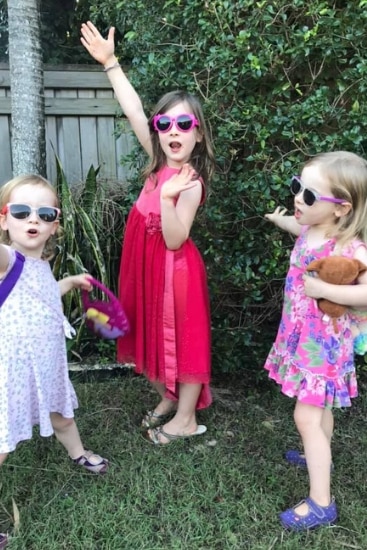 Sabrina is a mum to three girls. Image: Sabrina Rogers-Anderson

I even heard it twice last week

Despite having it together a lot more often lately, I still have tough periods.

My big girl has been having some minor issues at school recently and I spoke about it with a heavy heart to two separate people. Their reactions were almost identical: “She’s probably sensing you’re stressed about it and it’s making it worse.”

GAH! I went home and cried my eyes out.

I felt like I’d failed my daughter and was a mess of a mum. But when I finally pulled myself together, I realised neither of those things was true.

“And I would find myself again. Not the same version of me that I was looking for, but a stronger version. A wiser version. A woman who knew that she was enough, just as she was. A woman who had been tried in the fire but instead of being burned by it, came out gold. A woman who finally, after doubting and questioning and striving and hustling for her worth for years… came to the realization that she was and is and has always been… ENOUGH.” With all my stress and flaws and shortcomings, I was enough. Because ever since the day my first daughter was born, I’d been parenting from the heart.

I gave my children my everything, and if that included a little stress, so be it.

But I’d like to make one suggestion: don’t tell a mum her kid dropped out of school or joined a bikie gang or got a face tattoo because “they could feel her stress”.

She might not be as forgiving as me and you might end up with a face tattoo of your own.

Don’t say I didn’t warn you. This article was first published on Kidspot and was republished on theAsianparent with permission.