Talk about being a model husband. His actress wife, Joanne Peh documented the process.

From TV hunk to kitchen ‘uncle’, Qi Yuwu is looking dishevelled in a series of Instagram Stories posted by his wife, actress Joanne Peh, on Sunday (April 19).

In them, Yuwu sported a plain white t-shirt with messy hair and a stubble — a far cry from his dashing and poised characters he plays onscreen. 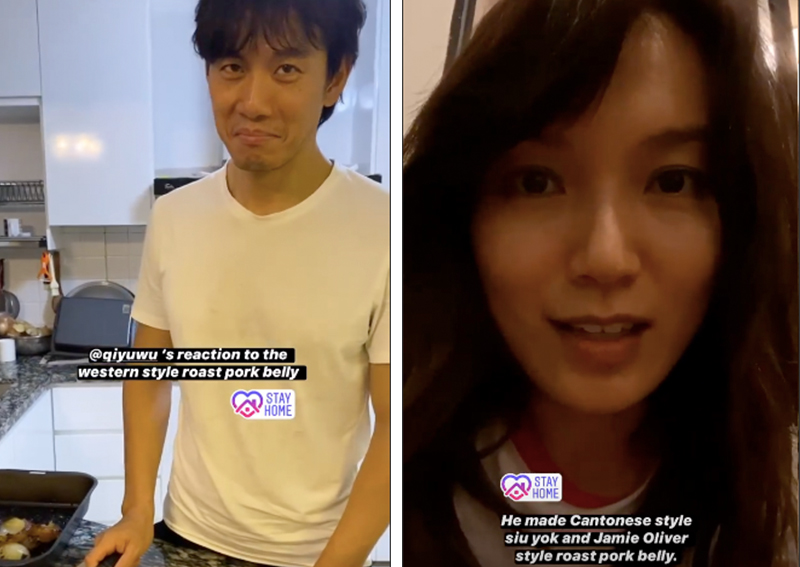 However, we’re inclined to give him a pass because he was actually slaving away in the kitchen to whip up some delicious roast pork. Talk about being a model husband.

The Guangzhou-born 43-year-old told Joanne in Cantonese in one of the clips: “What are we eating tonight? Siu yok (roast pork) lor!”

And it wasn’t just one batch of roast pork he was making, Yuwu actually tried his hand at a Cantonese-style roast pork and also Jamie Oliver’s style of roast pork belly. Unfortunately, only one of those made the cut.

While sampling the former, Yuwu remarked (in Cantonese again): “It doesn’t seem to be the best. Okay lah.” However, he wasn’t pleased with the Western-style version, making a sad face on the video.

The 36-year-old actress explained: “So the reason why he think he has failed is because the skin isn’t crispy enough. We think it could be because of the oven — the maximum heat is still not hot enough. Apparently you need about 250 to 300 degrees (Celsius) to get it to be really crispy.

“Some parts of it are pretty crispy, some parts are not. So, I don’t know. I’m not really good at this.”

While some may lament that the ‘uncle’ look isn’t a good one for Yuwu, we can’t help but stan a man who willingly gets all hot and sweaty over the oven to cook.

Partner Stories
KidZania officially opens in Singapore!
Groom My Room: The Importance of Kids' Bedroom
Vaginal Odour: 9 Different Types You Must Know About
Celebrate the First Lady of Your Life - 1855 F&B Mother’s Day 2022