Life as a single mum in Singapore is tough. Take the case of mummy Liu Anhui.

She drives a taxi, usually from 5 pm to 5 am every night, so that she can provide for her three-year-old son. She works all seven days of the week and does not get any days off.

It certainly isn’t easy, but, “I will persevere so my child will be proud of me,” she says.

She first got married in 2012, to her boyfriend of five years.

However, things got messy within a year, and her husband had an affair with another woman. They ended up getting divorced… but life lessons were learnt.

Just before her divorce, her husband apparently told her, “Everything you wear and own, who do you think pays for them?”

And that’s when she resolved to be self-reliant, “From that moment on, I told myself not to depend on any man, and that I have to be independent.”

She chose to give birth to her baby.

How This Single Mum in Singapore Became a Taxi Driver

It was her brother who recommended that Ms Liu become a taxi driver. Before that, she was working as a sales executive.

She tells Shin Min Daily News, “My brother is also a taxi driver. I am very grateful to him for his guidance and encouragement along the way.”

She has been working as a night shift taxi driver for six months now. Apparently, she earns about $2,000 every month.

The job comes with its fair share of challenges though.

Also, drunk and unruly passengers are sometimes a problem. 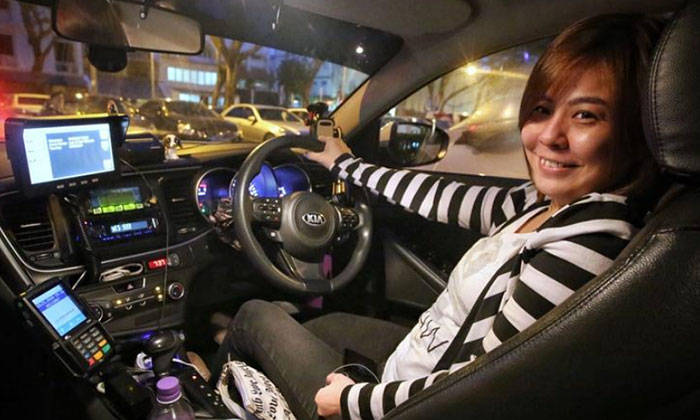 Ms Liu reveals to Shin Min Daily News, “There was once I picked up four passengers — three guys and a woman — at Tanjong Pagar. They were all Caucasians.”

“Once they boarded my car, one of the guys at the back kept asking if he could touch me. He said that he could pay me.”

“The female passenger at the front passenger seat also wanted to smoke. I was afraid that I would be in danger if I resisted, so I quickly brought them to their destination and drove off.”

“I didn’t want to create trouble.”

To avoid trouble, Ms Liu usually stays away from nightspots. She picks up her passengers from Changi Airport instead.

This mummy regrets not spending enough time with her son. But, she hopes that things will get better with time.

“My son is currently being looked after by my brother and mother. I can only visit him on the weekends. I wouldn’t have been able to tide through this period without the support from my brother and my family.”

She remains optimistic, “I am now slowly getting to like this job. Although it may be difficult at first, I will persevere so my child will be proud of me.”