COVID-19: Mum of Youngest Patient in Singapore Tells Other Parents to 'Be Thankful' "Be thankful your child/children is/are not confined to 4 walls in a hospital."

When children are in pain, it's their parents that hurt the most.

The mother of the youngest Covid-19 patient in Singapore has shared a photo of her child in hospital to tell parents to be thankful that their children are with them, even if "circuit breaker" measures mean they're going to be home for one whole month.

Mum Of Youngest Patient in Singapore With COVID-19 Shares Story

In a post on Sunday (April 5), Ryanlizana Celine Ng-Chan wrote that her daughter is case number 759, the youngest patient on the Ministry of Health (MOH)'s list so far.

The one-year-old girl was diagnosed with Covid-19 on March 27, and according to MOH's document, had recently travelled to the UK and France.

In a Facebook post that has since been taken down, Ng-Chan wrote that "reading a lot of parents complain about having to spend the whole month with their child/children" made her "want to put a tape over their mouths".

"Be thankful your child/children is/are not confined to 4 walls in a hospital." 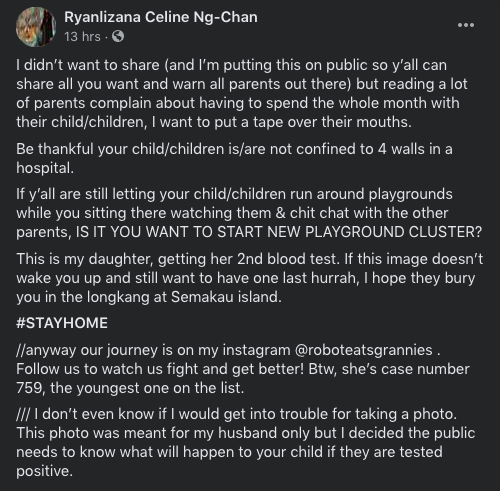 Ng-Chan wrote that she hoped the photo of her crying daughter getting her second blood test would serve as a warning to parents who "still want to have one last hurrah".

She continued: "If y'all are still letting your child/children run around playgrounds while you sitting there watching them & chit chat with the other parents, is it you want to start new playground cluster [sic]?"

In response to netizens who criticised her for going on a trip to Europe in March, Ng-Chan reiterated in a subsequent post that the aim of her post was to press upon parents that "home is the safest place" and not to "ignite a blame game".

According to her Instagram Stories, Ng-Chan herself was also found to be infected and is currently warded with her daughter at Ng Teng Fong General Hospital.

Ng-Chan's rant appears to have been prompted by her husband's observation that there were still "plenty of kids running around the playground", before the Government's circuit breaker measures kick in tomorrow (April 7).

A record 120 cases were reported on Sunday (April 5), bringing the total number of coronavirus cases in Singapore to 1,309.

For the latest updates on the coronavirus, visit here.

Also read: MY World Preschool in Bukit Batok Closes Ahead Of Schedule After Student Tests Positive For COVID-19