"I want to show a Singaporean woman who did not have a choice and had to do (the egg freezing procedure) overseas," said Ase.

This International Women’s Day, AsiaOne speaks to two local female celebrities who have used their social standing and platforms to push for worthy causes close to their hearts and empowering women. Felicia Chin and Ase Wang share with us their thoughts.

View this post on Instagram
@worldvisionsg Pilot Child Sponsorship program where children get to choose their sponsors for the first time❤️ . This is not the first time I’m sponsoring a child but to see these little kids dressing up, coming together and taking the first step in making a choice is so special. It made me think, this might be the first time someone is asking them to make a choice. How do you feel when you are asked to do that? One can feel empowered and valued. And that is a wonderful gift to a child. I got emotional too; when I was chosen and have the beautiful words spoken over me from my adorable charming child Shadhin❤️ It does something to us adults as well:) . We all have a gift for each other- it’s really not how much we have but how big our heart is. . I want to especially thank all of my friends who joined me in this #Chosen program ! Thank you for blessing these children and their families and communities!❤️ . If this moves you and you want to be a part of #Chosen , click on the link in my bio (or check out @worldvisionsg ) as there is a 2nd project coming right up helping the children in Myanmar! Rem to sign up by 31st March ❤️ . Thank you for watching, thank you for reading this and a special mention to the @worldvisionsg team who tirelessly made this project possible❤️
A post shared by Felicia Chin 陈凤玲 (@iamfeliciachin) on Mar 6, 2020 at 1:04am PST

Mediacorp actress Felicia Chin recently fueled talk that she would be marrying her long-time actor boyfriend Jeffrey Xu this year. But did you know that the 35-year-old, possibly the broadcaster’s resident girl-next-door, is already ‘mum’ to six children from all over the world?

Since she was introduced to the World Vision Sponsorship programme in 2018, Felicia has been sponsoring children from Myanmar, Bangladesh, Zambia, and Jerusalem. Late that year, she agreed to be a World Vision ambassador.

She told AsiaOne: “It’s my honour to know these children through the programme and be able to sow little seeds of love and hope into their lives…

“I jumped at the opportunity (to be the ambassador) as children and underprivileged families have always spoken to me at the core of my heart, and I am thankful to be a voice for them. I believe that children are meant to be loved and cherished, and all lives are truly precious.” 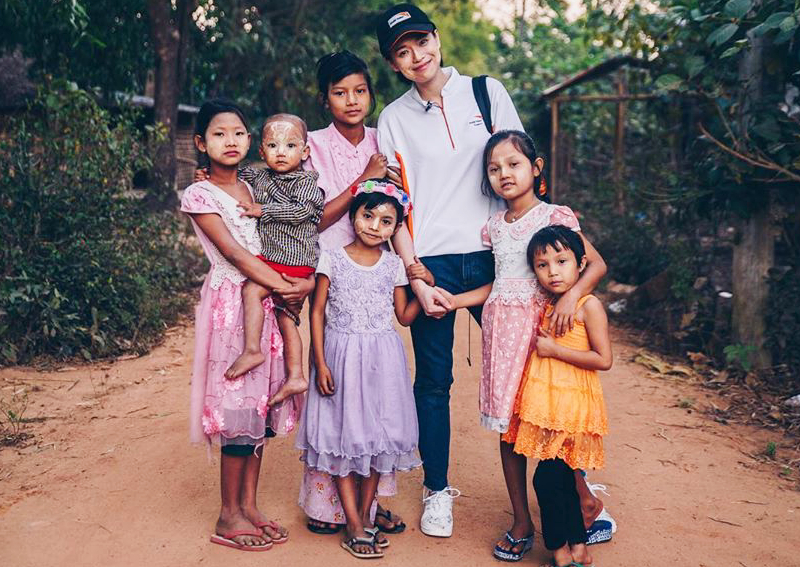 Empowering women and on being a sponsor: Felicia Chin in a photo taken when she went on a World Vision trip to Myanmar in 2019. | PHOTO: Instagram/ iamfeliciachin

Her latest sponsored child is a five-year-old boy named Barai Shadhin from Wazipur, a district located in the southern region of Bangladesh. In actuality, Shadhin was the one who chose Felicia through the Chosen project.

She has just received his particulars and has yet to contact him, but Felicia said he is “really cute”, and she’s looking forward to sharing more about herself with Shadhin.

“I’d like to be a more pro-active sponsor, one that remembers his birthday (Jan 1) and one that cheers him on and prays for his well-being! I also want him to know that there is someone in Singapore who loves him and believes in him, and is cheering him and his whole family and friends on. I’d love to visit him one day too,” she added.

“My wishes for Shadhin is for him to grow up safe and healthy, and know that he is loved, cherished, valued and precious!”

International Women’s Day and empowering women: Ase Wang hopes to champion for Singaporean women to be able to do social egg freezing in their country. | Via ase_wang / Instagram

View this post on Instagram
คุณรู้มั้ยว่าเวลาเก็บไข่ต้องทำอะไรบ้าง Episode 5 ของ ASE AND NIDA FROM THE SOI จะพาคุณไปชมอีกแง่มุมชีวิตของโอซา หลายคนอาจจะไม่รู้แต่ครั้งนี้เป็นครั้งที่ 3 แล้วที่โอซามาเก็บไข่ หลังจากที่ไปตรวจคุณหมอได้แจ้งโอซามาว่าจะมีปัญหาเรื่องการตั้งครรภ์เพราะเหตุนี้โอซาเลยตัดสินใจเริ่มเก็บไข่ของตัวเองและเหตุผลที่ต้องมาทำที่ประเทศไทยก็เพราะว่าที่สิงคโปร์มีกฎหมายที่ยังไม่อนุญาตให้ทำ โอซาพยายามที่จะเปิดมุมมองใหม่และสู้ให้ผู้หญิงที่ประเทศสิงคโปร์สามารถมีโอกาสเลือกที่จะเก็บไข่ของตนเองได้ ตามมาดูอีกมุมหนึ่งของชีวิตของโอซาจากความลำบากและการท้อ 2 ปีที่แล้วจนมาถึงจุดสำเร็จในวันนี้ รอชม Episode 5 ตอน 18:00 น วันนี้ Have you ever wondered what it’s like to freeze your eggs? Catch EP 5 of “ ASE AND NIDA FROM THE SOI “ AIRING TODAY AT 6 pm thai time !! A lot of you might not know this but this is the 3rd time I have done it. I was told it was very difficult for me to have a baby naturally so I didn’t have very much choice to quickly freeze my eggs. I had to do it in Thailand because my home country Singapore does not allow Single women to freeze their eggs, I try to open up conversation and fight for this for the woman in Singapore to be allowed to do this. Watch me in this heartfelt episode where I open up all my emotions and struggles through this two year process. #eggfreezing #fertility #freewomentofreezesgp #ivfjourney #ANFTS #samitivejhospital
A post shared by Ase Wang 王惠敏 (@ase_wang) on Oct 28, 2019 at 10:05pm PDT

One month after her upcoming wedding to American-Chinese businessman Jon Lor on March 31, Singaporean actress Ase Wang will head to the fertility clinic in Bangkok again for another round of hormone shots, followed by the retrieval of eggs.

The occasion will carry even greater significance than her initial procedure in June 2018.

“I will go straight into IVF (in vitro fertilization) after the retrieval,” the 38-year-old told AsiaOne in a phone interview.

Since her first experience with the procedure, Ase has been championing for Singaporean women to be allowed to do social egg freezing in their home country.

Current regulations here allow women to freeze their eggs only for medical reasons, such as undergoing chemotherapy which will adversely affect their fertility. Social egg freezing refers to cases where women do it for non-medical reasons, like when they are not married yet, or they’re not ready to have children.

Around two years ago, Ase found out from three different doctors that she has a low reserve of eggs, which meant that it might be difficult for her to conceive naturally. The revelation was shocking, as she dearly wants to be a mother once she has married Mr Right.

A woman’s eggs deteriorate in quantity and quality as she ages, and with more women in Singapore marrying and starting a family later, social egg freezing gives them the option of having children when the stars align.

Ase has spoken about the cause on her social media platforms, in public, and to local media. Women in similar situations have also contacted her to talk about it.

Ase said she simply wants to be “a person stating my case to my country”.

“I’m not fighting my government but I really would like the opportunity to work with them. I know the government has seen my video. I want to show a Singaporean woman who did not have a choice and had to do (the egg freezing procedure) overseas.

“The government cannot help us if we can’t voice out what normal Singaporeans are going through, and I will be happy to be that voice.”

She added she will create another video on her IVF experience.