Chinese New Year Traditions You May Not Know

How knowledgeable are you when it comes to Chinese New Year traditions? Read on to find out if there’s anything you did not know before.

Yes, it’s that time of year—malls have taken down all Christmas decorations and have replaced everything with overtly red ornaments. That’s not all; tell us who isn’t enthused with the blasting Chinese New Year music? Gong Xi…Gong Xi…Gong Xi Ni ahh!

There are certain Chinese New Year traditions you have probably read all before. Yes, there are other less enjoyable regulations that you must follow over the holiday season in order to avoid bringing ill luck into the coming year. So, pay attention to these Chinese New Year customs, also known as dos and don’ts!

Read on for several interesting facts that you may not have known about Chinese New Year.

What is the significance of mandarin oranges during Chinese New Year? | Image source: Stock

Our list of Chinese New Year traditions would not be complete without discussing food.

Chinese people love their food and also place an emphasis on the symbolic meaning behind food-stuff. It can be related to the pronunciation of the food name, the colour, the double meaning that some edible items represent, plus a variety of other reasons.

Mandarin oranges are symbolic of gold and wealth and luck, which is why everybody loves exchanging mandarin oranges. Lychee nuts mean close family ties and the pomelo represents abundance, prosperity and having kids.

Throughout the occasion, you should stock up on a variety of Chinese New Year dishes and snacks. Mandarin orange and the Cantonese words for luck and gold sound the same. Therefore, it is customary for people to bring mandarin oranges with them when they visit family members and distribute them as a token of sharing good fortune. 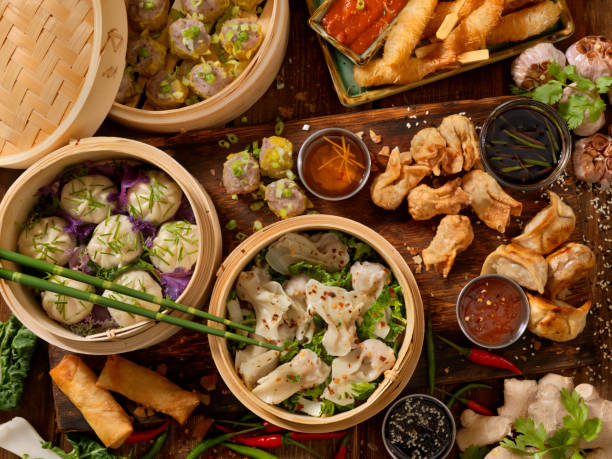 Who needs a reason to indulge in dumplings?

In addition to being little mouthfuls of delight, it’s thought that the Chinese word for dumplings, “jiao zi,” is related to the prehistoric term for discarding the previous.

Also consumed are other “symbolic” meals such as dried goods, pineapple tarts, or particular veggies.

This is so that people can have happiness and wealth in the coming year, according to popular belief.

Eating a lot of fish but not all of it could seem counterintuitive. Because the Chinese word for “fish” (, y) and the word for “plenty” (, y) are pronounced similarly, eating fish is a requirement during the Lunar New Year. You should leave some fish on the dish to represent abundance for the future because you don’t want to “eat up” all your good fortune.

Additionally, flipping the fish is regarded as unlucky. To avoid converting your gain into a loss, you should remove the fish’s spine once the top half has been consumed.

Now let’s go to the checklist of things you must do and accomplish during the start of the Lunar Year.

1. Greet everyone you meet

To others around you, utter the Cantonese phrases “I wish you wealth” (kung hey faat choi) or “I wish you health” (sun tai geen hong). During Chinese New Year, it’s customary to greet everyone you come across; chances are good that they’ll do the same for you.

It’s best if you set off a lot of firecrackers!

It is thought that the sound of the firecrackers frightens away evil spirits. You will be able to hear firecrackers all night long in many areas of China.

Chinese culture places a strong emphasis on fireworks. At a festive gathering, fireworks are frequently heard. Maybe a new company was just launched. There might be a wedding. Perhaps someone’s birthday is today.

In either case, fireworks are always close by and they differ from the ones we are accustomed to.

In China, fireworks are loud and usually not as pretty to look at!

One of the most popular Chinese New Year traditions is to do “spring cleaning.” You may make room for the new and get rid of the old by cleaning your house before the new year.

Additionally, you will get rid of any bad luck that may have gathered over the previous 12 months, but be careful; everything needs to be cleaned up before the start of the new year. The elders are very keen on this Chinese New Year superstition.

We have forewarned you!

Chinese New Year is all about welcoming the new and letting go of the old, as well as the changes that will occur in the upcoming year.

4. Grab your red socks. Wear as much red as you can, in fact.

Whether it is an undergarment, socks, sweater, or cap, get dressed in red. Because in Chinese culture, that colour is associated with loyalty, success, and happiness, making it one of the lucky hues.

You should also hang red decorations on your door or use red paper cuts to adorn your house.

The “fu” door decoration, which stands for happiness and success, is the most popular.

5. Get ready with your Red Packets (Hong bao) 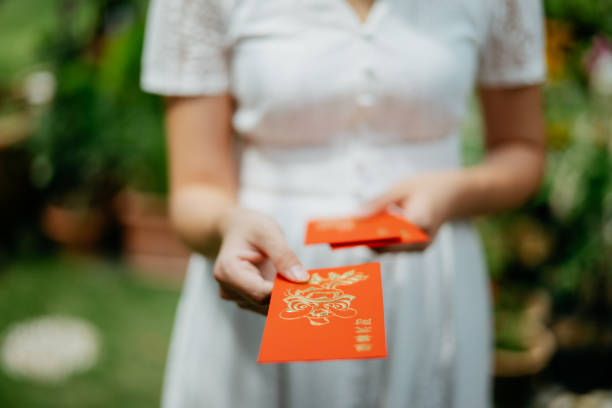 Much of Chinese New Year traditions revolve around money, or more general, wealth.

Like a hong bao (hóngbo red packet), nothing truly says Chinese New Year like it. Red packets are made for loved ones by kids and parents. Again, the colour red on the package represents luck.

The currency in the packets is additionally referred to as (y su qián), which is Mandarin for “money to anchor the year(s).”

The amount of money you gift also carries symbolic meaning; for instance, entire numbers are preferred in the north of China.

Additionally, traditional fortunate numerals like 6 and 8 are very auspicious in the southern part of China.

Six (—liù) is a component of the proverb “liù liù dà shun,” which refers to success that is easy. Eight (—b) rhymes with (f), which is “accumulating wealth.”

There are many customs associated with distributing red packets, but the most significant ones include accepting them sweetly and politely from the elders, being the one to distribute a pair if you’re married, and distributing just one if you’re widowed. Depending on how generous you are and how close you are to the receivers, the amount of money you place inside can vary.

A fresh start for you in the new year!

You won’t owe anyone anything in the new year if you pay off your bills.

On New Year’s Eve, kids should stay up as late as possible to bid the old year farewell and welcome the new. Tradition also holds that the later they remain up, the longer their parents’ lives will be. Of course, after the family reunion dinner, they would be more than pleased to spend additional time playing with their cousins!

Never cry on New Year’s Day, unless you want to cry all year long. You know what this means right? It means that your kid(s) can do whatever they want to get on your nerves and you still should not spank them. Most Chinese parents refrain from punishing their kids because they don’t really want their kids to be crying for the rest of the year, or so they believe.

2. Don’t wash or cut your hair

In Chinese language and culture, the symbolism of characters and homophones—two words with the same pronunciation but different meanings—is significant.

Because the Chinese character for hair (fa) is also the character used in the term “prosperity” (facai; ), the Chinese think that cutting or washing your hair on the first day of the New Year is unlucky.

Some people truly hold the opinion that washing any clothes on the first day of the New Year should be avoided because it can bring about ill luck.

Soak up all that fortune and hold on to it.

On the first day of the New Year, refrain from doing any cleaning at all, including sweeping the floors.

It is said that sweeping your floor will also remove all the good fortune that arrived with the start of the new year.

Before the New Year, stock up on books since the word for book (sh) has a similar sound to the verb “to lose,” and you don’t want to lose any of the good fortunes you’ve earned, no sirree.

5. Do not bring up death

When we were little, our grandparents would always tell us to stop saying the words “dead” or “ghost,” as they believed that doing so would bring bad fate to the person or perhaps the family. So keep in mind this Chinese New Year custom if you don’t want any terrible things to happen to you or your loved ones.

In Cantonese, the word “shoe” () sounds like a sigh. That’s why it’s not advised that you purchase new shoes during Chinese New Year, as doing so will bring about a lot of disappointment and unhappy circumstances that will cause you to sigh throughout the upcoming year. Put those shoes down (for now), no matter how cute they are.

7. Do not lend money

Avoid lending money since that implies that you will be making a yearly loan to that person. Yikes!

Do not, however, pressure anyone to repay whatever debts they may owe you.

At the very least, give them a pause at the start of the new year.

It is said that a sharp object will sever your path to prosperity and success.

9. Avoid breaking anything or dropping your chopsticks since doing so is bad luck.

If you break something, say “Sui sui ping an,” which translates to “Everlasting peace year after year,” right away.

The word “sui,” which in Chinese means “year,” is a homophone of the word “,” which means “broken” or “shattered.”

How To Get Rid Of Bad Luck

Chinese New Year will not be complete without the buzz of firecrackers. | Image source: iStock

Chinese people hold the Kitchen God with very high regard, also known as Zao Jun. He is the most highly worshipped God for those who want to protect their household and family. The Kitchen God’s duty is to inform the chief spirits (Jade Emperor) of the family’s behaviour over the past year.

There are also Chinese New Year traditions surrounding this belief. The household would burn a paper effigy of the Kitchen God at the end of the lunar year, in order for the god to ascend to heaven to see the Jade Emperor and deliver the report.

Before the burning of the effigy, the family would smear honey on the Kitchen God’s lips/mouth to sweeten his words or to keep his lips stuck together due to the stickiness. Firecrackers are used as it’s believed to speed up Zao Jun’s journey into the heavens.

We would like to wish you, our dear readers, a great festive celebration with loads of prosperity coming your way…have a good one.