Where to Buy Chinese New Year Food: Must-Try Places to Visit and Deliver in 2023

Here are the best places where to buy Chinese New Year food for dine-in or delivery to eat with your entire family.

Are you looking forward to the upcoming Chinese New Year? and have your Mandarin Collar outfits and gifts ready for yourself and your loved ones. To round it out, you’ll need some very special and traditional Chinese New Year foods. But don’t be worried! Here are some places where to buy Chinese New Year food and goodies that you can enjoy at the last minute.

Looking for traditional and high-quality foods to eat after visiting places during the Singapore New Year’s Eve countdown? Here is the list of where to buy Chinese New Year food. 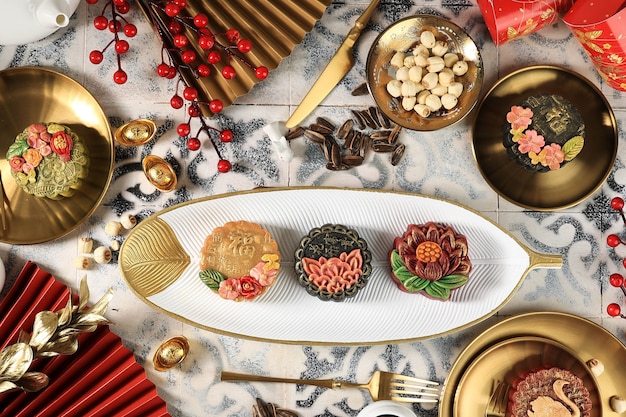 Chinese-style hotpot in Singapore is referred to as “steamboat,” and it is very similar to the versions served in China.

A hotpot is a large pot of steaming broth in which each diner cooks his or her portion of the meal by dipping meats, fish, or vegetables into the broth. The soup/broth comes in a variety of flavours, including chicken stock, seafood, beef, and Sichuan Mala (Spicy) Concoctions.

the dish is unsuitable for Singapore’s tropical climate. However, with the low cost of modern air conditioning, this is no longer an issue. Aside from the spring festival, many Singaporean restaurants serve steamboat or hotpot all year. Some restaurants now offer individual sets for solo diners.

Singaporean Chinese eat noodles on many festive occasions, not just during the spring festival season. This is due to the longish shape of noodles, which in Chinese culture represents long-term survival.

During the New Year, many Chinese restaurants serve special noodle dishes designed for large groups. Typically, such dishes will contain a large number of festive ingredients, such as la chang

Growth is very important in the Chinese New Year celebrations. During the Lunar New Year, the familiar image of the Sweet Rice Cake, or Nian Gao, is a welcome sight. Nian Gao, which translates as “higher by the year,” represents progress and growth.

While some regions make savory Nian Gao, the sweetened version is more popular in Singapore. Every Chinese New Year, chefs all over the city create their own versions of the treat using auspicious ingredients like tangerine, red bean, and black sugar.

Originally square barbequed slices of seasoned pork with the texture and smoky flavor of jerky, rou gan is now made with chicken, as well as a variety of spicy variations.

What’s interesting, however, is that these addictive snacks are sold all year and heavily promoted as quintessential Singaporean travel souvenirs. Apart from an old Fujian practice of preserving meat for the New Year, they have no cultural connection to the spring festival.

These adorable snacks are also consumed or distributed without much symbolism. In other words, they are simply enjoyed because of their connection to the New Year.

If you’ve ever been to a Chinese New Year celebration, you’ll know that the Chinese zodiac plays a big role in the decorations and performances. The “incoming animal” is always given centre stage.

Confectionery shops in Singapore devote January to creating unique buns, cakes, and desserts based on the incoming zodiac animal. Golden tigers, for example, were the stars in 2022, with their signature stripes used as decorative motifs. Fluffy and adorable rabbits take centre stage in 2023.

Chinese New Year rice cakes, or nian gao, are made with glutinous rice and sugar, with additional ingredients added to enhance flavor.

The traditional and most popular version in Singapore is depicted in the image above, which is steamed with brown sugar and wrapped in lotus leaves. There are also more modern variations, such as white coconut-flavoured ones.

The symbolism of eating nian gao is that nian means year and gao sounds like “tall” or “high,” so the name implies a soaring, fantastic new year.

There’s no need for travellers to be concerned about how to make this sticky and sweet festive cake. During the traditional 15-day spring festival period, many Chinese restaurants serve nian gao as a dessert.

Also read: 2023 Chinese New Year Goodies in Singapore That You Must Try