When Ranjubala and Satyendra Yadav of Bihar, India had a new baby, they had no way of knowing that they actually had twins. At first, the couple thought a tumour was growing out of their baby boy’s stomach. But it turned out to be a parasitic twin, another child who didn’t survive. 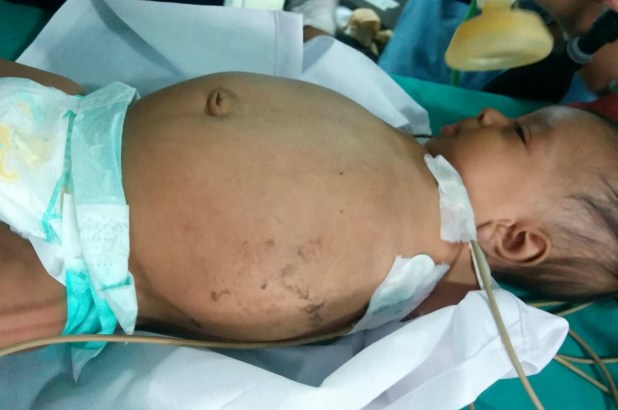 They first noticed that their 3-month-old baby had a painful swollen stomach, reports say, which prompted them to seek medical help.

Doctors then examined the baby’s kidney mass to treat the stomach swelling it caused.

After deciding to do surgery, doctors found the parasitic twin was masking itself as a tumour.

The baby boy’s twin had eyes and skin when doctors found him, and weighed two pounds.

Reports say that the surgery to remove the parasitic twin was successful. The unnamed 3-month-old is recovering well.

Parasitic twin or “foetus in fetu”

In the simplest of terms, a parasitic twin is a defective twin who relies on their “healthy twin” to survive.

Experts liken this to “vanishing twin syndrome,” or the condition that occurs when a twin disappears from the uterus. Ultrasounds or placental examination usually confirm this diagnosis.

Chromosomal problems and improper cord implantation are suspected to play a role, but the exact cause of this condition is still unknown.

This rare syndrome occurs in 1 in every 1 million live births. It happens when twins don’t separate while in the womb.

As a result of this, the healthy twin absorbs the underdeveloped one as a part of its own body. In some cases, the more developed twin absorbs multiple siblings.

This phenomenon has been a fascinating subject for researchers for over a century.

Past research has linked parasitic twinning to a protein deficiency during growth and development in utero.

The confusion between tumours and parasitic twins is understandable. Take the case of a 26-year-old in Los Angeles, who developed a teratoma that doctors later found had grown hair, bone, and teeth.

Though a baby can grow into adulthood with this condition, it also poses certain risks like Twin Reversed Arterial Perfusion or TRAP sequence, which results in heart failure.

Though this phenomenon has been happening since the 1700s, more research needs to be done to further understand why this happens.

READ THIS ALSO: Can this common vitamin really prevent miscarriages and birth defects?