Did Hong Kong-American actor Daniel Wu just drop a bombshell on Instagram with some juicy deets about his sex life?

You would think one of Asia’s celebrity sex symbols would have no problem getting some lovin’ from his wife.

Yet, Hong Kong-American actor Daniel Wu dropped a bombshell on Instagram with some juicy deets about his sex life — or lack thereof.

Trying to find some humor in all of this Corona virus craziness. Hand sanitizer has become a rare commodity these days. We were able to find this on Amazon. It should work right? But honestly being married for almost ten years, I would say my genitals are probably the cleanest part of my body so why would I need to sanitize after touching them?

In an Instagram post last month, the 45-year-old posted a picture of a hand sanitiser with a label that strangely read “Maybe you touched your genitals”. We don’t know why someone would put that on a hand sanitiser but maybe the company thought it was a cheeky way to get people to disinfect their hands regularly.

Daniel’s photo was accompanied with the caption: “Hand sanitiser has become a rare commodity these days. We were able to find this on Amazon. It should work right?

“But honestly being married for almost 10 years, I would say my genitals are probably the cleanest part of my body so why would I need to sanitise after touching them?”

The actor has been married to international model Lisa S for 10 years and they are both really gorgeous people.

Inquisitive minds want to know, and thankfully, one commenter went to dig up the hard truth and asked how marriage equates to genital cleanliness.

Daniel replied: “Lack of use.”

Just three words, and he left it at that. And we’ve got three words in response: Can you believe?

Clearly netizens had a field day because they could not.

The comments started rather innocuous, with some lamenting that it was a pity while others pointed out that such was the reality of marriage. One even cheekily suggested lotion instead of hand gel — and that is pretty self-explanatory. 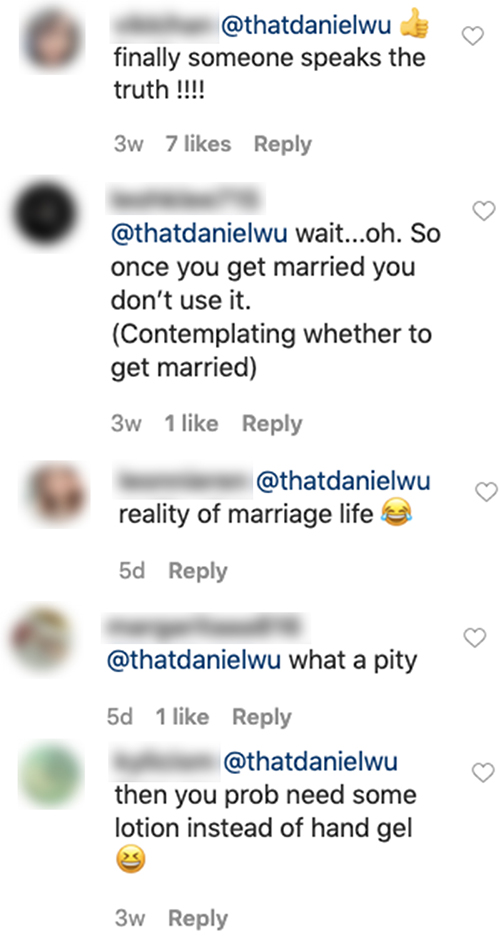 Then, ‘thirsty’ commenters appeared — like bees drawn to honey — and turned up the heat with their abundant desire. It was enough to make us blush just a tad. 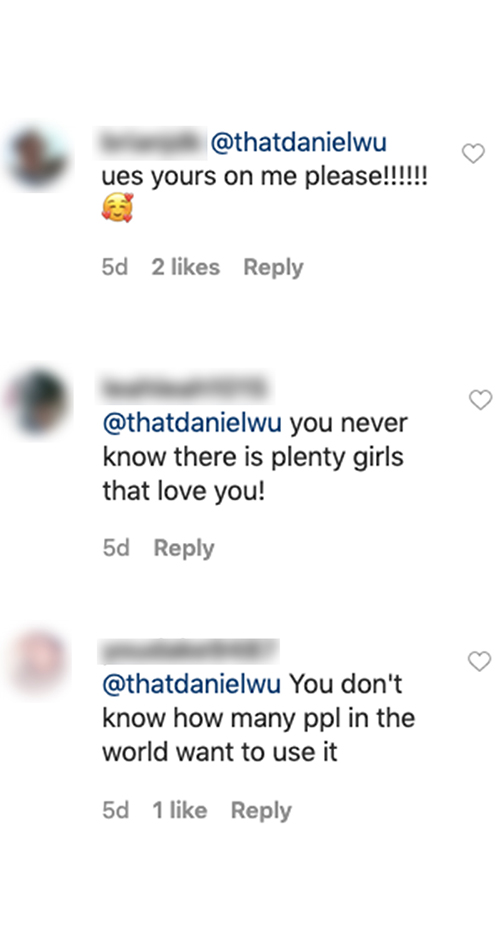 Yikes! Down, boy. Daniel is still a married man after all and he’s also a father to Raven, his six-year-old daughter.

It is worth noting that there’s a possibility Daniel was being facetious as he did preface his caption by admitting that he was “trying to find some humour in all of this coronavirus craziness”.

But, this is something we’ll never be certain about.

Only Lisa does, and we’re sure she ain’t kissing and telling.