The incident also served as a lesson for her son — the woman taught him to be grateful for the help they received that night and said she will remind him of the "three gor gors (older brothers) in the rain."

It can be difficult for motorists to get a helping hand during fine weather, much less in the pouring rain.

However, three young men braved the elements to help a female motorist and her child who were stranded on the Seletar Expressway (SLE).

In a Facebook post, Loh Wai Peng recounted driving home on Saturday (Sept 26) with her son at around 11.30pm.

They were travelling down the expressway when her car starting slowing down after she heard a loud pop. She stopped to check on the car and found that a tyre had burst.

Not knowing how to change tyres, the woman had to call for a tow truck. But getting the insurer to arrange for a towing frustrated the driver.

The insurer was unable to locate her policy because its system was down, Loh said, and she couldn’t recall her policy number.

Desperate for help, she raised her voice over the call and told the insurer that she would pay for the towing first.

Her son started crying as “he thought they would not be able to go home and they would be caught in a flood” due to the downpour, she wrote.

It was past midnight by then. She comforted her child while waiting for a response from her insurer.

Help came minutes later — but it was from three youths who approached her car in the rain.

One of them knocked on her door and offered to help change her tyre if she had a spare one in her car.

She accepted their help and the trio managed to change the tyre in about 10 minutes. Although she stood near them to check that they’d be okay, they asked her to go back into the car to accompany her distressed child.

After changing the tyre, one of them even reminded her to drive slowly.

“I was so relieved when my boy and I could finally continue our way home,” she said.

After tending to their own car, the youths had walked down the road to render help to other affected drivers, the woman shared.

As it turned out, several motorists travelling along that stretch of road suffered burst tyres from a hitting a pothole.

A driver shared video clips of his car’s punctured tyre on the same night, warning others about a pothole on the SLE.

Another said he spotted a deep pothole on the second lane and saw about seven vehicles with burst tyres on the road shoulder.

While she shook each youth’s hand and thanked them for their help before they left, the woman lamented not asking for their names.

Sharing a photo of the trio walking back to their car in the rain, she wrote: “Thank you so much for going out of your way to help us. You have been blessed with kind hearts and I wish the three of you well and happy.”

The incident also served as a lesson for her son — the woman taught him to be grateful for the help they received that night and said she will remind him of the “three gor gors (older brothers) in the rain.”

Netizens commended the youths for their kind act and also offered help in their own way, suggesting drivers who encounter vehicle breakdowns on expressways to call EMAS’ free towing service. 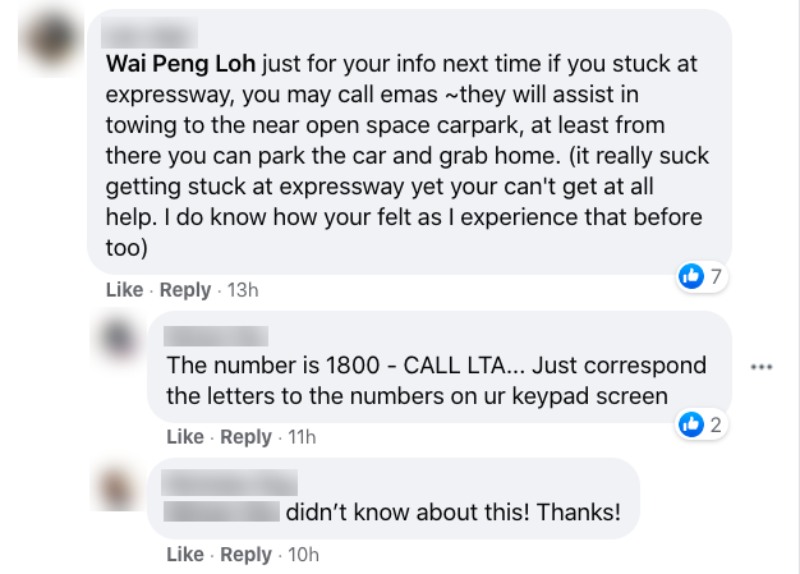