'Social Distancing is Dead': Crowds Observed Outside School, Within Supermarkets as Restrictions Ease Experts have also warned of "hidden reservoirs" of coronavirus infections in Singapore this week.

It has only been four days since we’ve exited the circuit breaker, but it appears that the reminders for social distancing have not been heeded.

A photo shared on Reddit on Thursday (June 4) showed a bus stop packed to the brim with students, with a Redditor saying: “Social distancing is dead.” 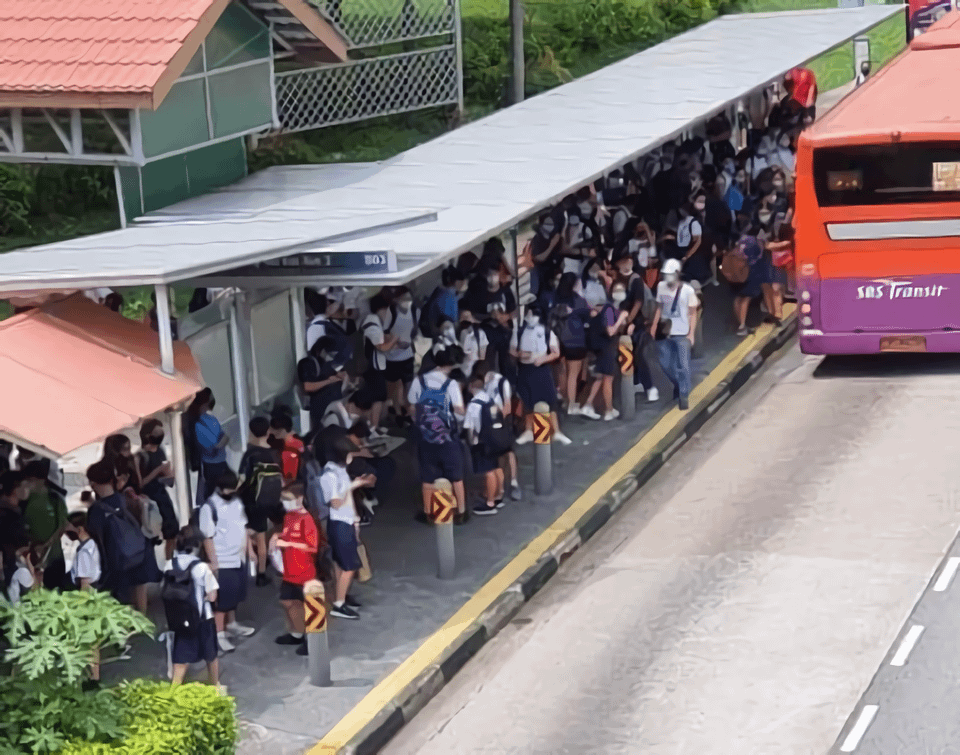 According to commenters, despite efforts to stagger the arrival and dismissal timings for students, such gatherings were considered bo bian (inevitable) due to bus and train arrival timings.

As Singapore entered Phase 1 of a gradual reopening, the safe distancing stickers have been removed from public transport vehicles as “physical distancing will be difficult once the crowds return“, Transport Minister Khaw Boon Wan mentioned in a Facebook post earlier this week.

While we may encounter situations where we can’t keep a one-metre distance away from others, throngs of shoppers in supermarkets have been spotted disregarding safe distancing rules over the past few days.

Over the course of two days, reporters from Today Online visited several supermarket outlets that were identified with “high traffic” by the Ministry of Trade and Industry in late April.

There, numerous shoppers were seen huddled close together, particularly in sections filled with fresh produce and staple groceries.

“No one really cares” or “follows the rules anymore”, 51-year-old customer Ms Nadia told the paper, citing the lack of staff stationed at supermarkets to remind shoppers of social distancing.

Another customer, Henny Tee, 39, shared how shoppers would shove her and squeeze among others to take what they want from the shelves.

“They just want to be fast and get out, but that’s not the way.”

Her observation was shared by 33-year-old Chris Teo, who noted that by being “fast”, these shoppers would, in fact, come in contact with more people than if they were to wait for their turn.

A Fairprice spokesman said they had introduced various crowd control measures to limit the number of customers within each store when necessary, despite discrepancies observed between different outlets.

Meanwhile, a spokesperson from Dairy Farm — which oversees several supermarket chains such as Cold Storage and Giant — said that as of April 27, safe distancing measures have been put in place in all their outlets.

As such, they will “remain committed” in reviewing and implementing extra measures where necessary to safeguard the wellbeing of customers and its team members.

On June 2, the government announced that COVID-19 laws, originally enacted for the circuit breaker (April 7 to June 1), are to be enforce indefinitely.

The regulations gave legal force to safe distancing and other measures to prevent the spread of the coronavirus, and people are urged to mask up and stay home.

Experts have also warned of “hidden reservoirs” of coronavirus infections in Singapore this week.

Professor Teo Yik Ying, Dean of the National University of Singapore’s Saw Swee Hock School of Public Health said: “Anyone may be infected and asymptomatic, but end up spreading the infection to many others.”