Labour is the final process that the majority of mothers undergo at the end of their nine-month pregnancy journey. During labour, regular painful tightening of the muscles of the womb (contractions) commences, causing the neck of the womb (the cervix) to thin out and open (dilate).

At the same time, the contractions cause the baby to descend down the mother’s birth canal. When the cervix is fully dilated, efforts from the mother to push, assisted by the involuntary contractions of the womb eventually result in the delivery of the baby.

Labour is a long journey that can last for more than twelve hours, particularly for first-time mothers. Fortunately, most mothers deliver their baby successfully without incident. Complications during pregnancy can, however, happen, with many of them being unexpected and unpredictable. The following are six common complications of labour, including risks to mother during labor and the ways doctors deal with them:

Labour is, unfortunately, a painful process for mothers. When the labour process is in full swing, a mother can expect her womb to contract painfully once every two to three minutes with each contraction lasting for at least 30 seconds or longer.

Considering that labour can take an average of twelve hours or longer (especially in first-time mothers), labour pain can be a daunting problem, tiring out the mother not only physically, but also psychologically, often even before the cervix can fully dilate.

Fortunately, there are many options available to women to relief pain in labour. Being mentally prepared and attending antenatal classes to learn how to relax and breathe deeply during labour is one of the basic first steps. Having a partner or supportive midwife around to provide encouragement has been shown to be helpful.

Many women choose to take a mixture of oxygen and nitrous oxide (“laughing gas”) through a mask or mouthpiece while in labour to reduce labour pains. A step further up will be to take painkiller injections that are given through the thigh or buttocks.

The painkilling effect of each injection can last between two to four hours. However, the injection can make some women feel drowsy. If the injection is given very close to the time of delivery of the baby, it can potentially affect the baby’s breathing, in which case an antidote may have to be given to the baby.

If the patient is still experiencing extreme pain despite the above measures, an anaesthetist can be called to administer an epidural anaesthetic. This involves inserting a small tube into the mother’s back through which a mixture of pain-relieving medications can be given.

When effective, the mother may feel that her legs have become very heavy and may not be able to move them temporarily until the epidural is eventually removed at the end of labour. The mother will not be able to feel any urge to pass urine during labour and will need her urine to be drained by a tube (or catheter) inserted into her bladder.

Unfortunately, despite the above measures, some mothers continue to experience severe pain in labour, one of the risks to mother during labor. The anaesthetist may occasionally adjust the mix of pain medications going into the epidural catheter. Sometimes, the epidural anaesthesia may need to be re-inserted. Thankfully, delivery of the baby eventually takes the pain away!

As labour progresses, the cervix thins out and opens up (dilates). Once the cervix is at least three centimetres dilated, in the presence of regular womb tightening, the cervix will continue to open up at a rate, in theory, of one centimetre per hour. The cervix is considered to be fully dilated at ten centimetres.

In a mother who is in labour for the first time, the dilation of the cervix may take place at a slower rate. The reason is that her womb has not been conditioned in a previous labour and takes a longer time to respond to the hormones of labour.

Up to two-thirds of first-time mothers may require some assistance to regulate their womb contractions. To do this, the obstetrician may order for a labour hormone drip (called oxytocin) to be given through the mother’s veins, through a tube that is inserted in her hand.

Oxytocin helps to speed up the frequency and increase the intensity of the womb contractions, allowing the cervix to dilate in the process. Unfortunately in some, the risks to mother during labor comes when the cervix refuses to dilate despite administration of oxytocin (failure to progress in labour). In these cases, a caesarean section may be necessary to deliver the baby.

In some mothers, the cervix manages to dilate fully. The labour process then enters what is termed the “second stage”. The baby’s head then descends further down the birth canal with womb contractions, rotating as it does so. Most normal deliveries occur after the baby’s head is rotated so that the face is turned to a position facing the mother’s back.

Delivery of the head and the rest of the baby then occur when the mother pushes, completing the second stage of labour. If this process is prolonged, the mother faces an increased risk of excessive bleeding after delivering her baby.

Cephalopelvic disproportion (CPD) is used to describe the situation when a baby’s head or body is too large to fit through the mother’s birth canal. True CPD is uncommon. However, doctors commonly use the term CPD when they suspect that the baby may potentially be too large to fit through the birth canal due to the slow progress of labour. The solution to CPD is to deliver the baby by caesarean section.

Labour is not only a stressful situation for the mother, but also a stressful journey for the baby. As such, the baby’s heart rate needs to be monitored regularly in labour. In Singapore, this is routinely performed by attaching a device called a cardiotocograph (CTG) to the mother’s tummy. In situations when the trace suggests that the baby may be undergoing excessive stress (commonly described as “fetal distress”), and the mother’s cervix is not fully dilated to allow an assisted vaginal delivery by forceps or vacuum, the obstetrician may make a recommendation to deliver the baby by emergency caesarean section. 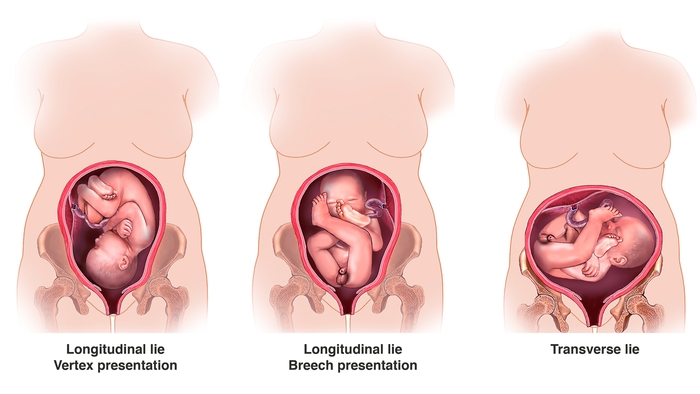 Risks to mother during labor: the most common malpresentation is called the breech presentation. | Image: pregnancybirth&baby

The majority of babies lie with the heads orientated downwards towards their mothers’ birth canals by 37 weeks of pregnancy. This is the most ideal position to achieve a vaginal delivery. Malpresentation refers to the situation in which the baby’s head is located in a different position otherwise.

The most common malpresentation is called the breech presentation, in which the baby’s buttocks rather than the head is orientated downwards toward the mother’s birth canal. This accounts for 3% of pregnancies by 37 weeks’ gestation.

Fortunately, the majority of breech presentations are detected prior to labour. The obstetrician may offer a procedure called external cephalic version (ECV): external pressure is exerted on the mother’s tummy in order to manually move the baby to a head-down position.

In mothers who decline ECV and whose babies remain in a breech presentation before labour, caesarean delivery would have to be planned. Some mothers present to hospital in labour without finding out in advance that their babies are in breech presentation.

Mothers are increasingly giving birth at a much later age. Coupled with the fact that mothers of Asian ethnicity have a stronger family history of diabetes, this puts them at higher risk of developing diabetes during pregnancy.

Poor control of diabetes in pregnancy causes the baby to put on excessive weight especially around the baby’s body and shoulders. In labour, a situation known as shoulder dystocia may then result, in which the baby’s head is already delivered, but the rest of the baby’s body cannot be delivered as its shoulders are stuck beneath the mother’s pelvic bones.

This could lead to injuries to both mother and baby as doctors and midwives attempt to deliver the baby through a series of special manoeuvres to free the baby’s shoulders.

Complications and risks to mother during labor and after can occur.

Most mothers assume that pregnancy delivery is over once their babies are born. In actual fact, the delivery process is not over until the placenta (after-birth) is delivered. Even then, the obstetrician will have to spend some moments repairing any tears or cuts in the vagina (episiotomy) that may have occurred during the delivery of the baby.

Mothers are especially at risk of bleeding heavily during this period. Normally, the womb muscles will contract naturally after the baby and placenta have been delivered. This process helps to prevent bleeding from the inside of the womb. In some mothers, however, the womb muscles are too tired to contract, especially if these mothers have undergone prolonged labour and delivery.

As a result, heavy and uncontrolled bleeding can occur which may put the mother at great risk. Fortunately, this can be dealt with in the majority by giving the mother injections and intravenous medications to encourage the womb muscles to contract.

Uncommonly, a blood transfusion may be necessary. Very rarely, in cases of heavy bleeding that fail to respond to medications, or in cases where bleeding is due to other causes (such serious tears in the vagina or cervix), the mother may need to be transferred to the operating theatre where life-saving surgery may be carried out.

ALSO READ: 1 or 2 centimetres dilated – what exactly does it mean?