'Dad, am I not a Singaporean?' Girl Asks After Classmate Comments on Her Skin Colour Very valuable teachings from the father to his daughter.

The recent slew of outrage and unrest in the United States has cast the spotlight on displays of racism and xenophobia, something several Singaporeans have seen mirrored in their own country.

Against the onslaught of bigotry — whether due to ignorance or prejudice — in their very own backyards, some people in Singapore have taken to educating themselves and others instead.

A poignant post on a father’s teachings to his daughter about race and nationality went viral after it was posted on Facebook on Tuesday (June 2).

A few months ago, Lijesh Karunakaran’s five-year-old daughter Mayuki came home from school asking him if she wasn’t a Singaporean because a classmate had told her that she wasn’t one simply for having darker skin.

Then, Mayuki’s school buddy — a classmate she was partnered up with in school — refused to hold her hand. He had told her that he was afraid of “[becoming] black”.

When asked why her buddy would say such a thing, Karunakaran had to pause and think of how to address the issue. He gently explained to Mayuki that perhaps her classmate might not have understood that unlike paint colours, skin colours don’t mix.

In another instance, the pair had gone shopping when a rainbow-coloured dress caught the young girl’s attention. She immediately pointed it out to her dad and exclaimed that she liked it.

But before Karunakaran could ask for the dress in his daughter’s size, a shop attendant had passed her a pink dress to wear instead.

Despite his attempts at telling the attendant that Mayuki liked the first dress, the latter allegedly said: “Rainbow colours are very vibrant. Your daughter is dark. Take this pink one. This is nice for her.”

Though he told the attendant off, Mayuki later asked her father if pink was more suitable for her.

“All colours look great on you. Pink, blue, white, black… all colours look good. But the rainbow colours look perfect!” he reassured her. “You look very beautiful in this,” he told the girl as he dispelled her insecurities.

Through these incidents, he “used the opportunity to give her a lesson on race and nationality and that skin colour doesn’t define us,” Karunakaran wrote in his post.

After his post went viral, support poured in for the family, praising Karunakaran for his wisdom and Mayuki for her maturity.

Some netizens shared that they, too, have experienced similar incidents, one of whom pointed out how words alone carried a weight that could influence a child’s thinking, before thanking Karunakaran for sharing his story. 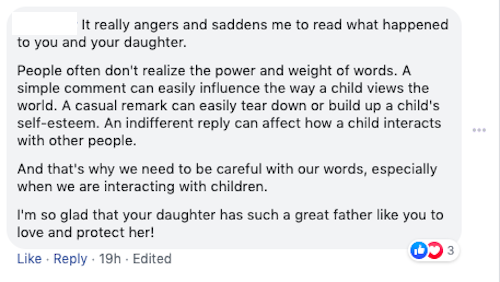 ALSO READ: Trilingual at 3: My Daughter Speaks Mandarin, English and Bahasa Fluently. Here’s How We Did It