Read and learn about these rather common birthmarks in newborns...

Newborn babies do not always have flawless skin. Dry skin, peeling skin and acne are just a few of the “problems” these little ones may face. Mongolian spots (or Mongolian blue spots) a bluish discolouration of the skin, may also cause worry among parents.

Birthmarks are common among newborns. But sometimes, they may raise concern among parents, especially if the birthmark has an unusual appearance or colour.

This article will tell you about one type of common birthmark among newborns — Mongolian spots.

What are Mongolian spots?

The spots commonly appear on a baby’s lower back and/or buttocks. | Image: Pinterest

Also known as slate grey nevi and formally known as dermal melanocytosis, Mongolian spots are a type of pigmented birthmark. They are bluish-grey in colour, varying from a very dark blue to a lighter grey. The colour is usually uniform over the whole birthmark.

Mongolian spots come in various sizes, but most are a few centimetres across without clearly demarcated edges. They are flat, not raised.

Typically, these birthmarks are present on the buttocks and/or lower back. Occasionally, they are found on a baby’s arms or legs.

They are usually present at birth or develop soon after.

When the baby is still in the womb, the cells that eventually form the skin move to the surface.

According to medical experts:

“A particular type of cell called dermal melanocyte moves to the top layer of the skin between the 11th and 14th week of pregnancy.

“These dermal cells usually disappear by the 20th week of pregnancy. Doctors believe that Mongolian blue spots are the result of these cells not moving to the top layer of skin and not disappearing.”

And because these cells are trapped deep within the skin, the area takes on a blue-grey hue.

How common are Mongolian spots?

This condition occurs in both genders. It is slightly more common in boys, although the reasons for this are not known.

The mythology around Mongolian spots

According to a Korean myth, Mongolian blue spots occur when a shaman spirit of childbirth — Samshin halmi — slaps the baby’s bottom so that he exits mummy’s womb!

In China meanwhile, these blue spots are known as “mark” (taiji). The story here is that when a baby is born, he gets a “spank” from God as a start to life.

And Japanese mythology has it that a Mongolian spot (known in Japanese as “asshirigaaoi” or “blue bottom”), is believed to be the result of mummy and daddy having sex during pregnancy.

Should you be worried about your baby’s Mongolian blue spots?

Seeing these birthmarks on a newborn might be alarming for parents especially since they resemble bruises. But rest assured that they are non-cancerous, not painful and present no health danger to your child.

Occasionally, the spots may be mistaken for the symptoms of a spinal condition known as spina bifida occulta. But, according to the Spina Bifida Association, these spots are reddish in colour and not the distinctive blue-grey colour of Mongolian blue spots.

Almost always, the spots fade away by the time your child is around five. Some take longer, generally disappearing during the teenage years. Speak to a doctor about possible options if they linger and your child is disturbed by them.

Sometimes, Mongolian spots may be associated with extremely rare ( fewer than one in every 100,000 newborns) metabolic problems such as mucopolysaccharidosis or gangliosidosis.

If your child appears to have bluish marks at birth, get a doctor to confirm that they are indeed blue spots. Also, if you notice that the spots change colour or appearance, you should consult a doctor without delay.

Why parents should take pictures of these spots at birth 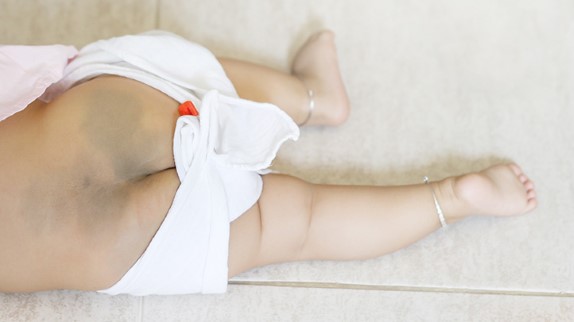 Image source: What To Expect

As mentioned earlier, Mongolian spots may look like bruises or “spank marks.” Concerned teachers or daycare providers may mistake these birthmarks as signs of abuse.

For this reason, parents should take pictures of these spots while their baby is a newborn. If he still has his Mongolian spots when he is older, it’s important to mention the presence of these birthmarks. If necessary, show the pictures too, to avoid any misunderstandings.