Behind all the glitz and glam is a heartbreaking story.

It’s not every day that a 15-year-old undergoes extensive plastic surgery. But this teen only had one goal: to look her age. The solution? This Chinese girl gets plastic surgery.

The teenager from Liaoning, identified only as Xiaofeng, first made headlines last December for looking like an elderly woman. Her saggy skin was a result of progeria, a rare genetic condition that causes premature ageing and does not have a cure.

Xiaofeng finally revealed her new look to the public at a press conference on Jan 20 to much fanfare. But behind all the glitz and glam is a heartbreaking story.

According to her mother, who suffers from the same disorder, Xiaofeng’s skin had started to sag when she was one.

Ashamed and bullied, Xiaofeng had quit school, choosing to remain home and tend to her family’s pet birds.

“Sometimes people call me ‘auntie’ or ‘grandma’. It makes me quite sad,” she told reporters in Mandarin. “With the way I look now, I don’t want to go to school. If I could change my looks in the future, I would want to return to school.”

“I don’t need to become the prettiest. I just want to be like other teenagers and live without all the strange looks from others.”

Fortunately, help was at hand.

A Stroke of Luck: Chinese Girl Gets Plastic Surgery

After Xiaofeng’s plight caught the attention of the public, philanthropist Guo Mingyi organised several fundraising events in her benefit, garnering enough donations to foot the bill for her plastic surgery.

Shi Lingzhi, the director of Shenyang Sunline Plastic Surgery Hospital, told reporters that Xiaofeng’s surgery would typically have cost over 500,000 yuan (S$97,724). But after hearing her story, the hospital decided to waive 70 per cent of the fee.

Xiaofeng underwent facial rejuvenation surgery, reconstructive surgery on her nose and microsurgery for the wrinkles and sagging around her mouth on Dec 29. 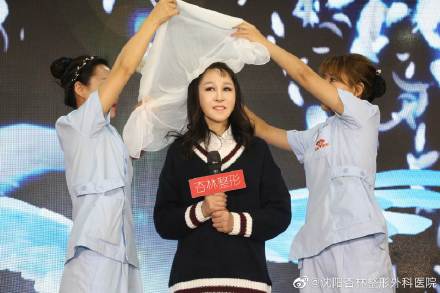 One month on, she couldn’t be happier with the results.

“Right now I’m very happy and very moved because I’ve become beautiful. I can feel that I’ve become more confident,” she told reporters at the press conference. “After going through this operation, I believe that there are miracles in this world.”

And her transformation isn’t just skin deep. Xiaofeng shared that she is now looking to further her studies: “After I return to school, I’m going to study to be a doctor. I feel like becoming a doctor will help me help others and spread love.”