'My Son Grew His Brain Back'

Noah Wall was born with virtually no brain yet within three years he amazed medical professionals when the organ had grown up to 80 per cent of its original size.

When Noah Wall was born with virtually no brain due to spina bifida and hydrocephalus, the doctors thought there would be little chance for his survival.

Yet despite having just two per cent of his brain capacity at birth, within three years little Noah defied odds and grew back his organ to 80 per cent capacity.

Doctors thought that Noah would suffer severe mental challenges and would be unable to talk, walk, eat, hear or see. 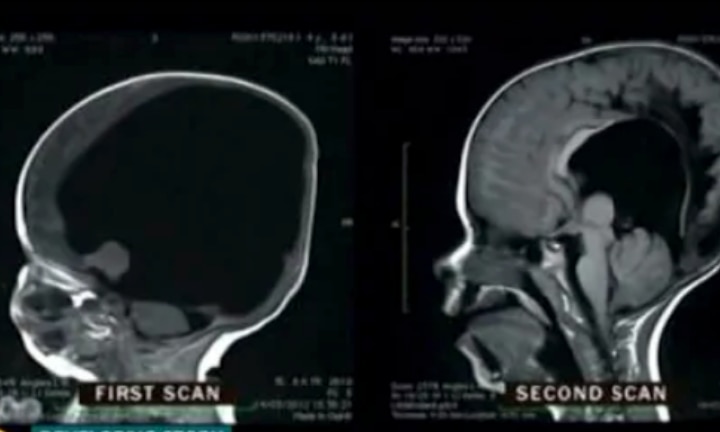 Noah Hill grew 80 per cent of his brain back. Image: ITV

“He’s as bright as a button”

Yet Noah is six years old and thriving and according to his dad Rob, he’s “as bright as a button.”

The parents knew at birth that Noah would have this condition and were offered a termination five times, yet his mother was convinced she would carry him to full term.

“We wanted to give Noah the chance of life,” Rob told Good Morning Britain.

Noah, himself even is hoping to learn to surf one day.

“The doctors are delighted that they were wrong,” his mother added. Noah is now six and has defied odds. Image: ITV

“He made a choice to survive”

So how did Noah magically grow his brain? In an article published in the NeuroQuantology, written by J. Shashi Kiran Reddy and Contzen Pereira explained how they think Noah’s brain grew.

“Noah’s brain stem triggered the growth of his brain, which began demonstrating several cognitive functions associated with his upper body, as compared to the severely impaired paralysed lower body functions (due to the spina bifida).”

In Noah’s case, the outcome “demonstrates his willpower that made a choice to survive, which resulted in the growth of his brain which situates an example of understanding free will and choice from a neuro-quantum mechanics interpretation”.