Amazing Dad 'Breastfeeds' His Newborn Daughter: How Did He Do That?

One dad shares the amazing photos of him "breastfeeding" his own daughter in order for her to gain the benefits of breastfeeding!

Doctors recommend that mums breastfeed their newborn babies in order for them to enjoy the benefits of breastfeeding early on. However, sometimes, mums aren’t able to breastfeed their child right after giving birth.

This is what happened to April Neubauer in the US, who suffered pre-eclampsia and had to undergo an emergency C-section. She and her husband Max planned on making sure their newborn daughter got breastfed as soon as possible so that she’d get skin-to-skin contact and of course, precious colostrum – two of the biggest benefits of breastfeeding just after birth.

But due to April’s complications, she couldn’t. So, Max took it upon himself to “breastfeed” their daughter instead!

Max ended up breastfeeding his daughter after a nurse offered him the chance to do so! | Image source: Maxamillian Kendall Neubauer

The amazing dad shared that he took his shirt off for some skin-to-skin contact with his daughter, Rosalía Lupita Valentina Neubauer. While he was finger-feeding her milk, one of the nurses asked him if he would be interested in wearing a fake nipple, so he could “breastfeed” his baby. 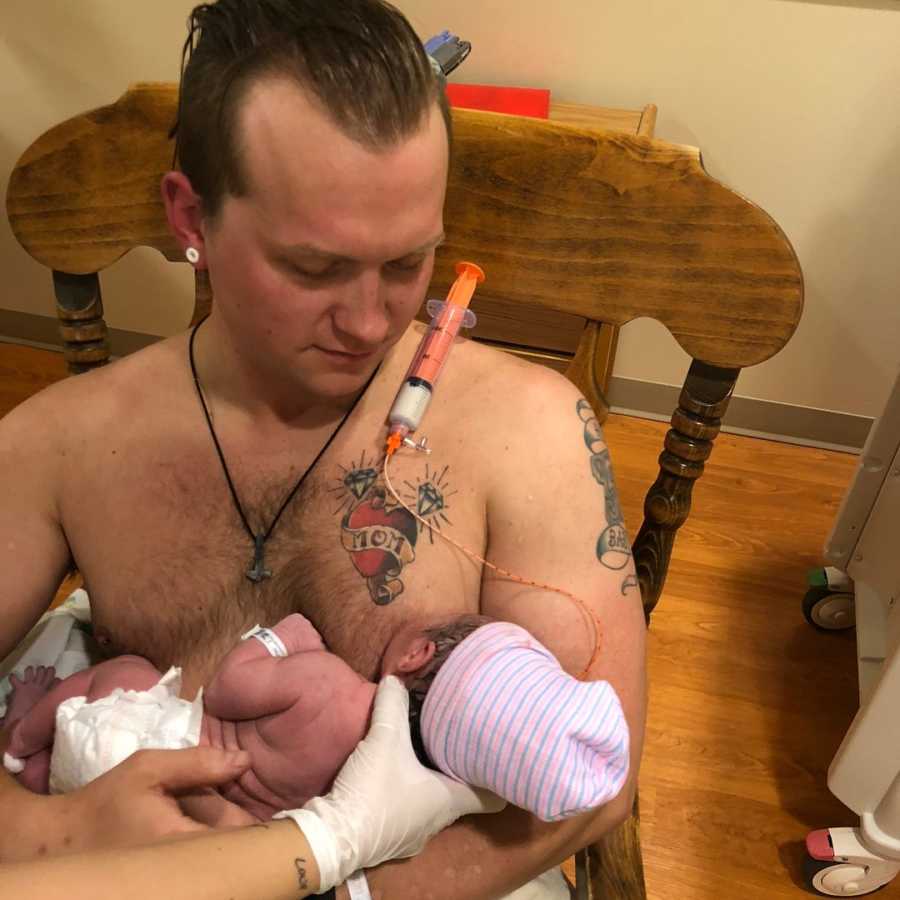 In a post on Facebook, Max writes, “This super rad nurse made [an] epically killer offer, and I was fortunate enough to slap on a suction cup fake nipple.”

Max added that he was up for trying anything at least once, so he accepted her offer. And amazingly, he was able to “breastfeed” his baby girl!

Hats off to this dad who shows that fathers truly can do anything mums can. (Now, to get them to get pregnant and give birth…)

Breastfeeding Has a Lot of Benefits!

The benefits of breastfeeding extend beyond providing nutrition to babies.

Having skin-to-skin contact with your baby helps the two of you bond, and it makes them feel secure. It also helps them calm down and relax and lowers stress and anxiety levels.

For mums, breastfeeding does a lot when it comes to burning off the pregnancy weight that you gained. Breastfeeding releases oxytocin, a hormone that helps a woman’s uterus return to normal size after birth. It has also been linked to a lower risk of breast cancer, ovarian cancer, and osteoporosis.

Breastfeeding is also cheap and convenient – you don’t need to sterilise any bottles or mix formula in order to feed your baby. All in all, doctors recommend that mothers breastfeed their babies for the first year of their lives, and beyond if possible.

READ: “Father’s Milk”: Meet the dads who breastfeed their babies