“Because my mum is a very happy old lady, with her very happy and well-loved dog. I don’t have the heart to stop her.”

A wee dog in Toa Payoh has joined the pantheon of meme-worthy critters who’ve masked up during the pandemic, and in adorable fashion too.

It was on April 29 that the canonical canine first appeared on Singapore’s radars through a rather superb picture taken by The Straits Times photographer Gavin Foo. In a worrying article about the vulnerability of senior citizens to coronavirus infection, an all-encompassing photo was used.

It’s a picture taken at Toa Payoh Central that aptly captures the current situation of the heightened safety measures in Singapore. There’s a cordoned-off coffee shop. There’s a GrabFood delivery rider, presumably waiting to pick up an order. There’s a senior lady riding her bicycle. And then, there’s her fluffy little dog ambling ahead of her… with a bag over its head. 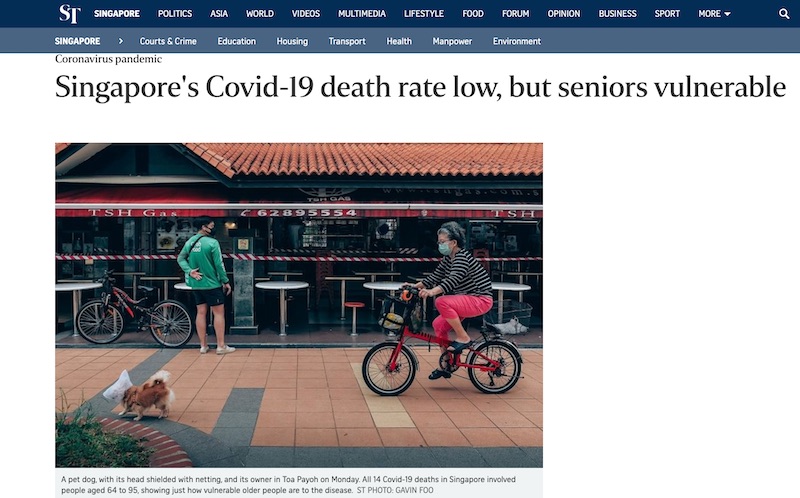 Adorable Dog with makeshift face mask which turns out to be a breathable bag. | PHOTO: Screengrab/The Straits Times via AsiaOne

The caption assured that the wee pup is just fine, noting that its head is simply shielded with netting — a makeshift face mask that simply screams kinds of cute. It ain’t part of the law for sure, but fur babies probably need as much protection from the coronavirus as much as their owners.

It is within the realm of possibility that pet animals can contract COVID-19 too. According to the World Health Organisation, several dogs and cats (including a tiger) in contact with infected humans have tested positive for the virus, but it’s important to note that there’s no evidence that animals are able to play a role in the outbreak by transmitting the disease to a human.

But back to our dog. In a triumphant post, Facebook user Mohammad Bakhtiar shared an image of the protected pup from another angle, and this time, the only subject of the picture. And it did not disappoint.

It’s likely that the same image was caught by Foo, considering the similar colour tone and environment. The picture also gave a clearer look at the dog’s makeshift mask: a net made out of fabric light enough for the animal to see and breathe through. How, and we cannot stress this enough, supremely adorable.

The daughter of the dog’s owner, Rachel Liaw, has since stepped forward on Facebook to speak on the pupper’s newfound fame. Its name is revealed to be Baby (of course), a chihuahua that Liaw got for her mother about eight years ago.

According to Rachel, Baby has been wearing that soft netting on its head even before the coronavirus outbreak — a system put in place to ensure that it doesn’t go about licking other dog’s urine.

“We never stopped her, even after they came out in the news,” wrote Liaw.

“Because my mum is a very happy old lady, with her very happy and well-loved dog. I don’t have the heart to stop her.”

She assured that the dog is very much comfortable enough with the netting to walk around with it on its head.

Animal lovers in China, having been through the outbreak earlier than the rest of the world, have been ahead of the curve when it comes to protection for their pets. On Weibo, Chinese netizens have been sharing how they’ve been keeping their domestic companions safe by way of everyday items, including paper cups, socks and plastic bags.

As #China is gripped by the #Coronavirus outbreak, the concerned pet-owners have come up with a creative solution to protect their pets.

They are flocking to buy or make face masks for their dogs and cats to prevent their pooches from catching the deadly virus. pic.twitter.com/698wamV4Us — Reporterly (@Reporterlyaf) February 18, 2020

Of course, the most popular one of them all remains to be a face mask-wearing cat with eye holes cut out. The famed feline now even has a 3D figurine sculpted after it, so there’s a good chance that our very own Toa Payoh chihuahua could get one too.

Circuit Breaker Adjustments: What To Expect From 5 May