In a Viber call scam, an elderly woman has had her life savings wiped out in less than an hour.

According to her daughter Labina Fariah, she is left with only $99 to her name.

In a Facebook post on Tuesday (Jan 14), Labina spoke of the ordeal that began the day before, when her mother picked up an unknown call via the messaging app Viber.

Claiming to be a representative from DBS Bank, the male stranger told her mother that her account was being hacked, and he would require her bank card number and her Internet banking details, including her user ID and password.

Labina explained that her mother fell for the scam as she was indeed having issues with her online banking app and assumed that the caller would handle the matter. Her mother expressed her suspicion about a DBS employee calling through Viber instead of her phone number, but the scammer managed to brush it off. 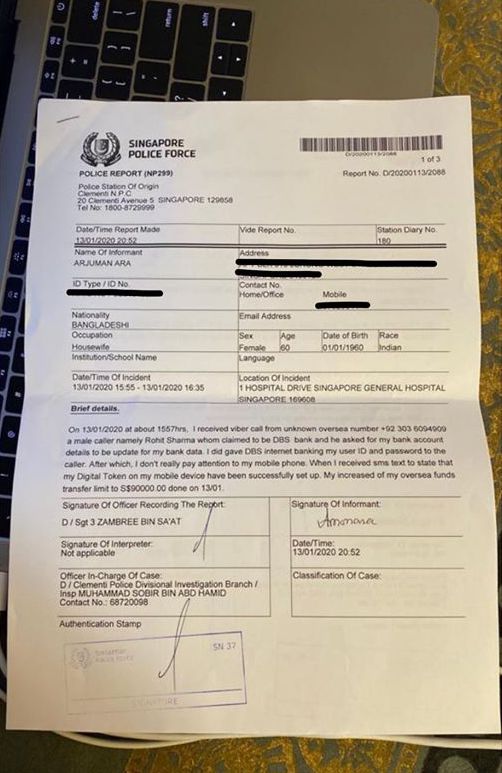 Viber call scam: it all happened within half an hour. | PHOTO: Facebook / Labina Fariah

Once those details were provided, the machinations of the shakedown went into play. The scammer got access to her account, increased the overseas funds transfer limit to $90,000, and started multiple transfers to an account under the State Bank of India.

The entire procedure happened within half an hour, according to Labina. In the end, the scammer pilfered $54,999 from her mother’s bank account.

“To many of us, the amount is small but my friends, that was my mother’s life savings,” she wrote. “It was all taken away from her within 30 minutes.”

Viber call scam: ‘Modern day robbery’
A police report has been lodged, and Labina is currently going through the process of recovering the money. In her post, she took issue with how easily such a large amount of money can be transferred without additional verification.

According to Labina’s updates in her post’s comments section, the money has already been transferred to India, and it’s now up to DBS India to pursue the matter.

When contacted by AsiaOne, a DBS spokesperson did not provide any updates about Labina’s case, but issued an advisory that DBS/POSB employees will never ask customers to provide Internet banking access credentials or conduct fund transfers.

“Scammers are actively targeting bank customers in Singapore via automated calls, voice calls and SMSes, phishing for bank account and personal information that could lead to loss of money,” the DBS spokesperson informed AsiaOne, adding that customers can contact their 24-hour hotline should there be any unusual activity in their account.

“We would like to remind our customers to always be vigilant and never give out their personal security information, enter sensitive information into unknown websites, click on URL links originating from unknown sources, or reply to unsolicited SMSes, e-mails or calls.”

In a follow-up Facebook post this morning (Jan 16), Labina expressed disappointment that DBS would not be able to resolve the issue quickly. She wrote that it would take up to 45 days before the bank would have “any form of reply” to the family while investigations are ongoing.

Labina also mentioned that she got in touch with the High Commission of India in Singapore, who advised her to get the Attorney General’s Chambers and Interpol India involved.

“All these will take time and I am not sure if we will ever get my mother’s money back,” she wrote. “My fear is, by then, my mother’s entire life savings will be in the wrong hands.”

Her latest plea to the public is a callout to anyone involved in cybersecurity in India.

“If DBS fails my mother, at least I know, as a daughter, I have tried my best!”

Also READ: Chinese Woman Dies After Years Of Eating Just Chilli And Rice To Save Money