The Doctor Just Kept Saying 'I Hope I Am Wrong,' But He Wasn't

“We’ve found a problem with the baby’s heart. It’s to do with the two major arteries,” the doctor told Sydney-based makeup artist Ashleigh Walters-Quinn.

“I’ve found something on the scan. I’ve got a doctor on the phone and we want to … he’s going to explain to you what it is.”

These were the heart-stopping words Ashleigh Walters-Quinn heard when she went for her 20-week scan.

It was the second pregnancy for the Sydney-based makeup artist and producer but her first had ended tragically in miscarriage at eight weeks. Ashleigh had already been on edge during the early weeks this time round, but once she’d passed the magic 12-week mark she had thought she was in the clear.

The sonographer’s words gripped her with fear. Ash was taken into a room where a doctor spoke to her down the phone.

“We’ve found a problem with the baby’s heart. It’s to do with the two major arteries,” the doctor told her. “I’m going to send you to RPA today to see a foetal cardiologist.” There would be a problem as soon as baby Harry was born. Image: KidSpot.

“The baby’s two main arteries were in the wrong spot”

Tests revealed that the couple’s baby had something called ‘transposition of the great arteries’, a condition where the baby’s two main arteries were in the wrong spot, sending oxygenated blood to the lungs and deoxygenated blood into the body, instead of the other way around.

The cardiologist explained that this wasn’t a problem while the baby was in utero, but it would be as soon as he was born.

To add yet another crushing blow to the young couple, the cardiologist suggested Ash have an amniocentesis ‘just to make sure nothing else was going on.’

“In some way that was the hardest part,” Ash recalls. “We’d had discussions about what we’d do if there was something really, really wrong with our child at different stages of the pregnancy…but when you’re faced with the actual decision…”

Thankfully, the amniocentesis came back clear.

Ash and Sam began researching the heart condition that their baby had and were relieved to discover that with the right care, recovery rates were excellent.

They understood that if all went to plan their baby had every chance of living a happy, normal life.

A plan was made to induce Ash at 39 weeks so doctors could be fully prepared for the lifesaving surgery he’d need at birth. Finally, the couple thought they could relax.

In the end, Ash began going into spontaneous labour just before her due date but the labour was largely uneventful.

Doctors let her hold her baby son, Harry, for around ten seconds but then he was quickly worked on by doctors. The plan was that Ash would go to a ward to recover while Sam would go with Harry to the children’s hospital to be with him before his surgery. 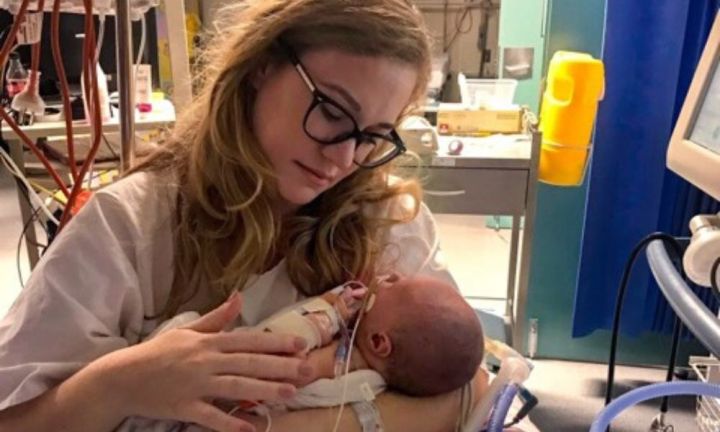 “I couldn’t feel half my face”

So far everything was going to plan.

But then, on the ward, Ash’s epidural began to wear off. “I was in a fair bit of pain but you know, I’d just had a baby so I assumed that was normal.”

What wasn’t normal, though, was the amount of blood Ash was suddenly losing.  A midwife helped her to the shower and Sam saw she was bleeding. A lot.

“I remember sitting in the shower and I was shaking. A nurse said, ‘I’m just going to start weighing the blood’.”

The next thing Sam was back in bed and her pain was going through the roof.

“I was trying to say to my sister that my face was numb. I couldn’t feel half my face. I don’t remember going to the maternity ward. It was like I was on a distant planet.”

They concluded that Ash had a tear in her vaginal wall and a haematoma causing the bleeding.  Ash ended up going into shock and shook with convulsions.

“I couldn’t really talk. All I remember is at some point I managed to say ‘I don’t know how much more of this I can take. At no point did I have the thought that I was going to die, it’s not as coherent as that. But…some part of me knew that was going on.”

She was raced into surgery.

“They were saying we might have to remove your uterus, we might have to do this or that. I was off the planet on morphine and I just signed what they put in front of me. I remember the lights rushing past like something in a movie. A bunch of people lifted me onto an operating table. And that’s all I remember.”

Meanwhile Ash’s husband Sam had been summoned from the children’s ward. He raced back only to discover that his wife’s bed had gone.

“He had just had to sign all these waivers for Harry’s surgery, listing all the things that could go wrong so he was already shaken from that.  And then there was no bed, no me and he honestly thought I was dead.” Ash is forever grateful for the blood transfusions that have kept her alive. Image: KidSpot.

The blood transfusion saved her life

Ash ended up having to have two units of blood to save her life. The doctors said they never fully understood why she had bled so much.

Meanwhile Harry, thankfully, came through his surgery with flying colours, heading home just one week after surgery instead of the usual four to six. Ash took longer to recover; she was still in a lot of pain for many weeks.

“My GP told me it can take up to a year to recover from a blood transfusion because your body has someone else’s blood but you’ve got to get through it, you know?”

Today, Ash and Sam are so grateful that there was blood on hand to save Ash’s life.

“I’ve been a blood donor in the past but I never wanted to be someone who would need blood myself but that’s the way it turned out. It’s such an easy way that people can save lives.”

Husband Sam says he will be forever grateful that things turned out the way they did.

“We’re lucky to live in a country with access to the best medical care and with citizens who donate blood to save lives,” he says. “I try not to think too much about it but without these things what should have been the happiest day of my life could have left me without my wife and child.”

Ash’s story will be told on Giving Life, a new series about the lifesaving effects of blood donation. Giving Life premiered on Nine on 16th November and will also be available to view on 9Now.