Some netizens even went to the extent of threatening to dispose of the students' belongings if they saw them.

In a time where publicly available seats and tables are scarce, thanks to necessary social distancing, some students are drawing ire for allegedly leaving their belongings behind overnight to “chope” tables for themselves. 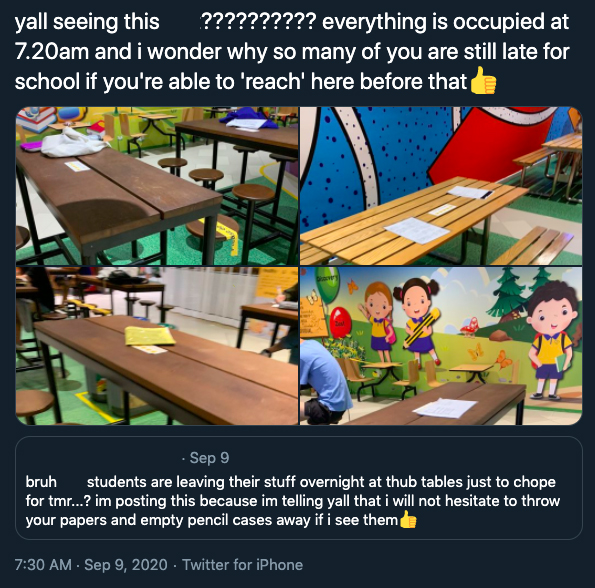 “Everything is occupied at 7.20am,” he said. “Students are leaving their stuff overnight at [Tampines hub] tables just to chope for [tomorrow].”

Another user alleged that she had seen people sleeping overnight too.

Within hours of posting, the tweet garnered over 800 retweets and over 1,000 likes, with many netizens expressing their disgust and disdain towards the students. Some even went to the extent of threatening to dispose of the students’ belongings if they saw them. However, some netizens explained that the students might have arrived earlier that morning instead and had gone off for breakfast as the facility’s lights do not switch on till 7am. In response to AsiaOne’s enquiries, an OTH spokesperson said users should be considerate and not leave their personal items behind when not using the Hub facilities.

“All unattended items will be removed by security officers for the benefit of our next user,” they added.

“We would like to encourage everyone to play a part in contributing toward the creation of a kinder and more gracious culture toward each other.”

According to a follow-up tweet earlier this afternoon, authorities were observed going around “warning people to not leave their stuff unattended” and allegedly “scolded a few people for reserving seats.”