During pregnancy, your body goes through a lot of changes. And such alterations don’t necessarily end when you give birth. You may continue to experience certain symptoms for days or even weeks after giving birth because your body needs time to heal.

Postpartum bleeding is one such sign. However, some vaginal bleeding following delivery is typical.

Because it contains the same kind of blood and tissue as menstruation, this shedding (lochia) is not entirely dissimilar. Nevertheless, due to how huge the uterus becomes during pregnancy, lochia occurs on a much greater scale. The discharge after giving birth also lasts somewhat longer than a typical period and undergoes a few modifications before ceasing.

Postpartum bleeding, also known as Lochia is normal. This bleeding after birth can be heavy for the first two days but then subsides.

In the first two days, you will probably require pad changes every 3-4 hours. After that, pad changes will be every 6-8 hours. If you have lochia, it is advised to use sanitary pads and napkins instead of tampons, as tampons increase the risk of infection in your healing vagina and uterus.

Although every individual is unique, lochia typically progresses in colour and volume in a similar way. Before becoming a white-coloured mucus, it starts out as blood.

For at least three or four days, Lochia is dark or vivid red. The flow is strong, and you might pass little clots as well. One thick maxi pad should be soaked every two to three hours.

Lochia becomes more watery and changes to a pinkish-brown tint after roughly a week. Since there is less flow, you might not be able to fill pads as quickly.

After roughly 10 to 14 days, lochia finally takes on a creamy, yellowish-white hue. Some people can now comfortably wear thin panty liners underneath their clothes.

Your baby’s blood will likely be vivid or dark crimson for the first one to three days following vaginal birth. It can have a fragrance similar to the blood you regularly bleed during your period. The blood may also contain a few clots that range in size from a grape to a prune.

The blood should turn pinkish or reddish between days four and seven. Clots should diminish or vanish.

The discharge will probably be white or yellow towards the end of the first week. It ought to stop in three to six weeks.

After a C-section, bleeding is typical and will eventually stop. Because the doctors clean the uterus out with a swab to make sure they removed all of the placenta and membranes during the surgery, women who have had a caesarean section typically have less lochia. These ladies may probably have more bleeding for a longer period of time because that doesn’t happen during vaginal delivery.

After your C-section, you will experience more bleeding, which will gradually lessen. After four to six weeks, bleeding ought to stop completely.

Increased bleeding could be a symptom of postpartum problems or too much exercise.

If you develop more severe bleeding or clots after your C-section, bleeding from the incision site, or any other unsettling signs, call your doctor right once.

After delivery, bleeding ought to lessen for a few weeks before ceasing entirely. However, a few factors, such as the following, can momentarily improve blood flow:

What to do if you’re bleeding

It’s likely that the initial bleeding will be so severe that you’ll need to wear a hospital pad. When you are discharged, the nurse might offer you some of these extra-absorbent pads.

You can switch to a regular menstruation pad once the bleeding decreases.

To avoid infection, make sure to replace your pads frequently. Tampons should not be used unless your doctor gives the all-clear. You can switch to a panty liner once the bleeding is minimal enough or you’re only seeing discharge.

Lochia Duration: How Long Do You Bleed After Birth?

Lochia will stop about one month after delivery. For some women, it can last for 6-8 weeks. According to an article published in the Singapore Family Physician,

Bleeding After Giving Birth: What Else Causes It? 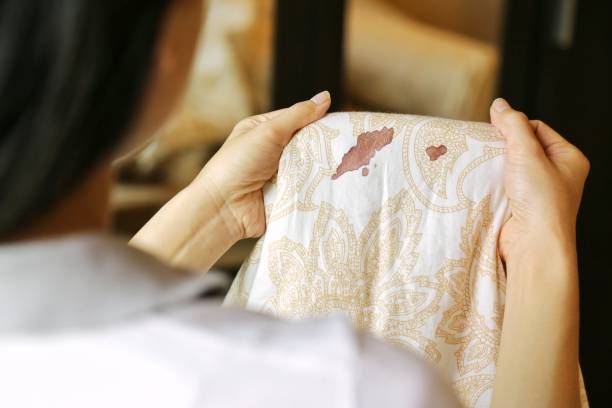 There are a number of potential causes for irregular bleeding after birth. If the blood isn’t truly coming from your uterus, you may have a vaginal tear, a bladder haemorrhage, or even an unidentified bleeding problem.

In these circumstances, you should probably see your doctor, who will be able to massage your uterus, expel any clots, and—if necessary—prescribe medicine to assist your uterus contract.

Postpartum Checkup: What to Expect on Your First Doctor&#8217;s Appointment After Giving Birth

Postpartum Sex: What You Need to Know About Sex After Giving Birth

When Can I Travel After Giving Birth? Mums, Here’s Your Guide on Postpartum Travel

How To Stop Postpartum Bleeding Faster: Home Treatment For Lochia

After childbirth, recovery takes many weeks. During this period, relax and get as much sleep as you can. Following are some recommendations for managing postpartum bleeding:

Allow your body to heal. Even while it might sound wonderful to get back to your regular routine, doing so can keep you from mending. Additionally, it can make your bleeding worse or recur.

Change your maxi pad every few hours, and refrain from inserting anything into your vagina for at least six weeks to prevent infection.

When To Call The Doctor

Normally, Lochia doesn’t lead to problems. The amount of bloody discharge should naturally decrease till it is finished. You should keep an eye out for indications of abnormal bleeding or discharge, though.

In the weeks following giving birth, if you develop any of the following symptoms, call your doctor right away: