You only need TWO ingredients!

One thing that bugs me me around the house is fruit flies (forgive the pun). They are everywhere.

Buzzing around the fruit bowl, compost and even in the pantry, these pesky buggers are hell on earth.

Luckily for us, one savvy mum has created a fail-safe DIY trick you can create at home using just two ingredients. 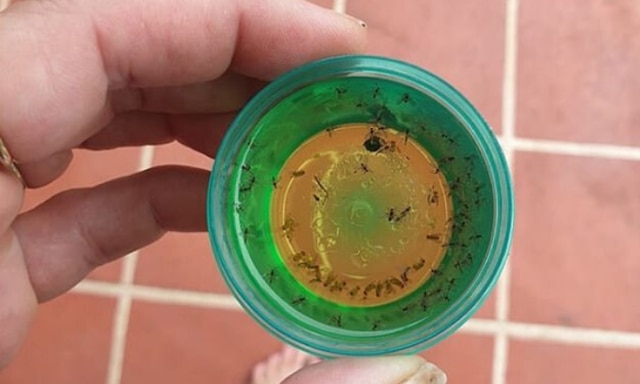 Using just two ingredients you can keep fruit flies at bay, especially on how to get rid of flies in apartment. | Image: Facebook

The mother shared her method using apple cider vinegar and dishwashing liquid online along with a picture of her handiwork.

“For those suffering from fruit flies, gnats or whatever these feral pains are… apple cider vinegar and dishwashing liquid – this is what it caught in 30 minutes,” she wrote.

Another woman admitted that she too used this trick and was able to get rid of an influx of flies in Queensland.

“I put some small dishes around the house with apple cider vinegar and a dash of dishwashing liquid and have caught so many. Highly recommend,” she wrote.

Another said that she put out the solution and within five minutes the flies were gone.

“I set a trap with apple cider vinegar and dishwashing liquid hoping to catch this one annoying fly was circling us the whole night. Took about five minutes,” she said.

We also tried this at home, and it does like other mums say, work a treat.

“Glass jar with equal parts balsamic vinegar and warm water plus a drop of dishwashing liquid. Place it in a warm spot,” she advised.

How to get rid of flies in apartment: sometimes bug sprays just don’t work as effectively as DIY solutions. | Photo: iStock

This article was first published in Kidspot and was edited and republished on theAsianparent with permission.

7 DIY Home Solutions To Get Rid Of Ants