Make Your Own Cream Cheese At Home With This Simple Hack Here's also a mini basque burnt cheesecake recipe to try along with your DIY cream cheese!

When Singaporeans decide they need something, they really go to great lengths to obtain it. Anyone remember the long queues that formed outside McDonald’s thanks to Hello Kitty, when Bake Cheese Tart (RIP) first opened in Singapore and more recently, for surgical masks?

Well, thanks to circuit bakers, baking ingredients have also periodically gone OOS (out of stock) in supermarkets across Singapore. During this time of circuit breaker, the four supermarkets close to me have at different points of time run out of vanilla essence, plain flour, sugar and baking powder.

And yes, that was the number of times it took me to visit to finally lay my hands on all these somewhat essentials in baking.

The latest thing that we can’t seem to find on shelves in the West? Cream cheese. The quest to find it started when a friend’s husband’s birthday was coming close about two weeks back and he requested to have a homemade cheesecake.

My friend’s futile search of cream cheese at the stores near her meant that I started keeping my eye out for it too, and even up till the point of writing this piece, the four supermarkets near me still don’t have cream cheese on their shelves. So I did what every millennial would do when faced with a problem — turn to Google for an answer.

Google’s answer: Make your own cream cheese. The best part, it would take less than 30 minutes to make.

Adapting this recipe, read on to learn how is cream cheese made using just whole milk and vinegar, and a makeshift cheese cloth. While the cream cheese did taste good, I used it to make a mini Basque burnt cheesecake, or what they call the “there’s no way to screw it up since you burn it anyway” cheesecake.

How is Cream Cheese Made? Try This Recipe

1. Add the milk to a pot and heat to a simmer while stirring constantly. Add 1 tbsp of white vinegar and continue to stir as the milk curdles. 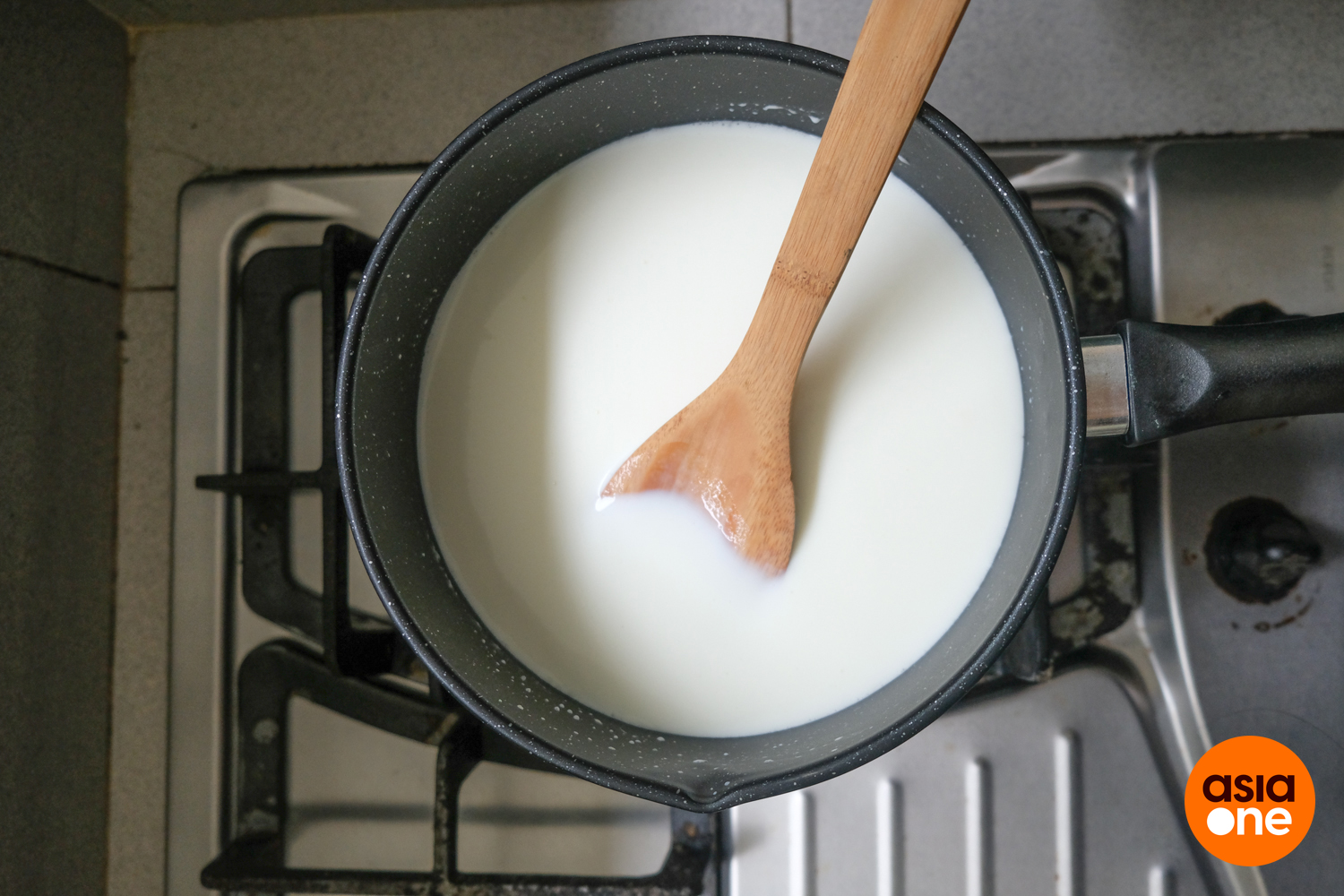 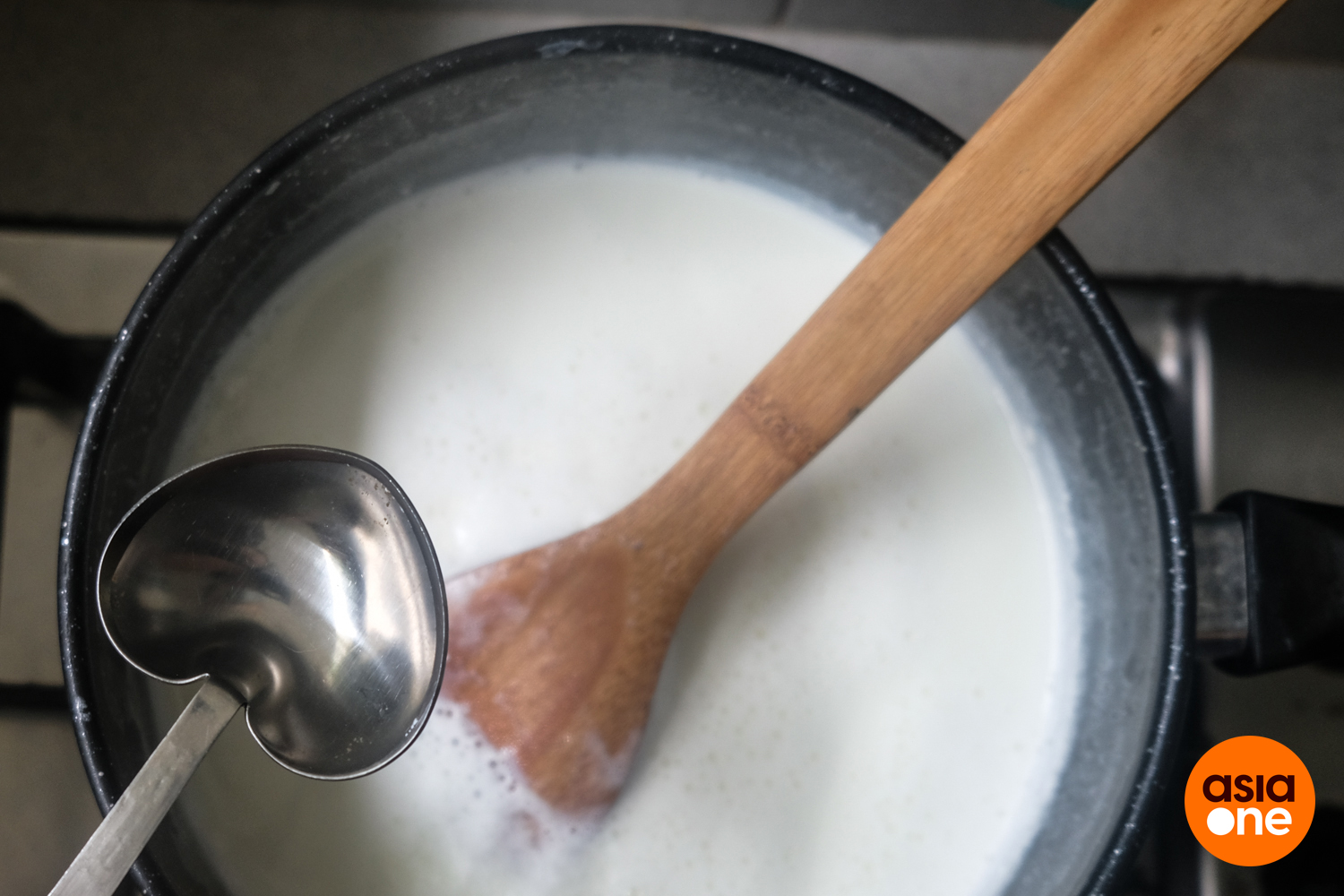 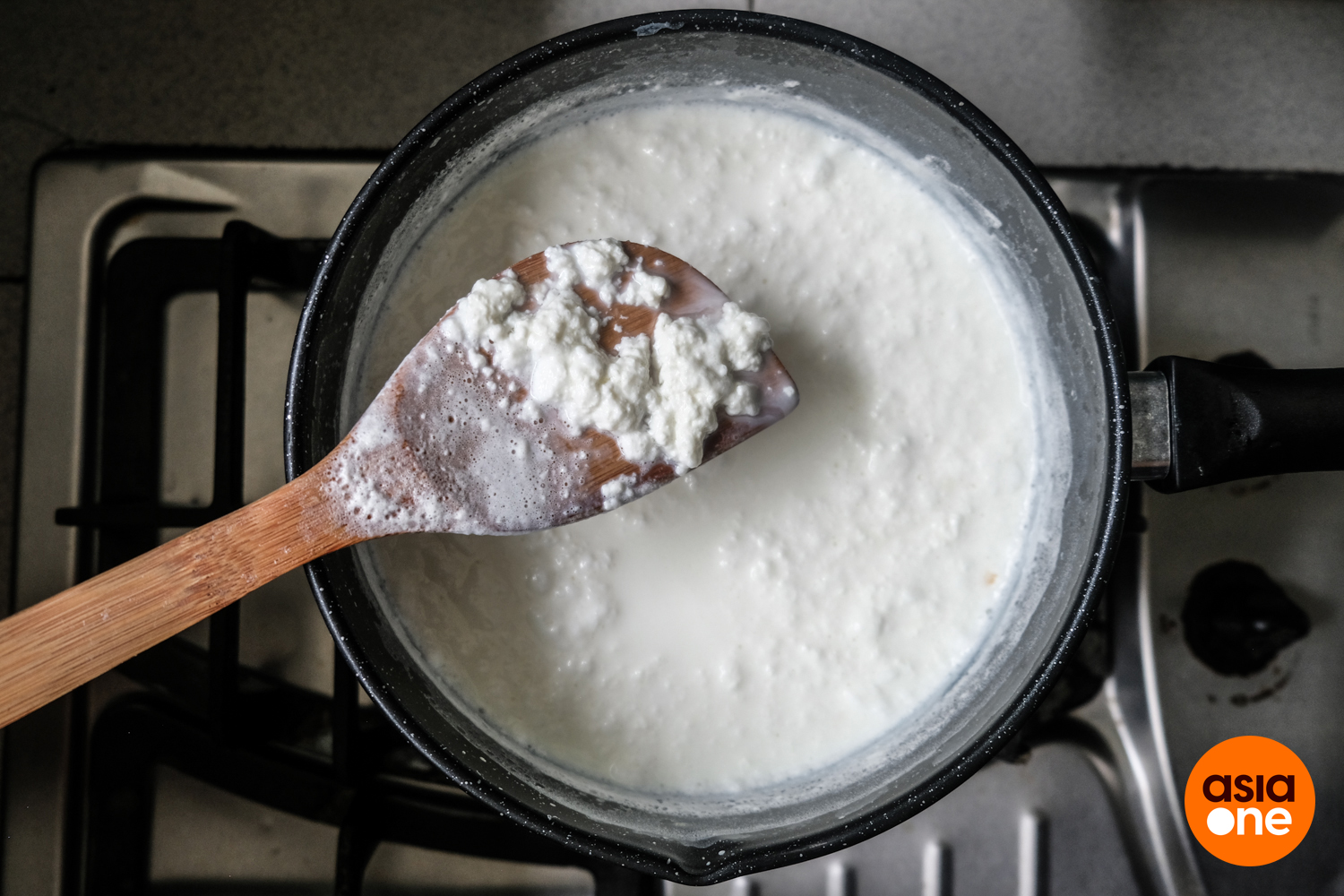 2. After a 1 min of stirring, add another 1 tbsp of white vinegar. Repeat again till add 3 tbsps of vinegar are added to the pot and stir until the mixture separates, with thick curds floating to the top. Remove the pot from the stove. 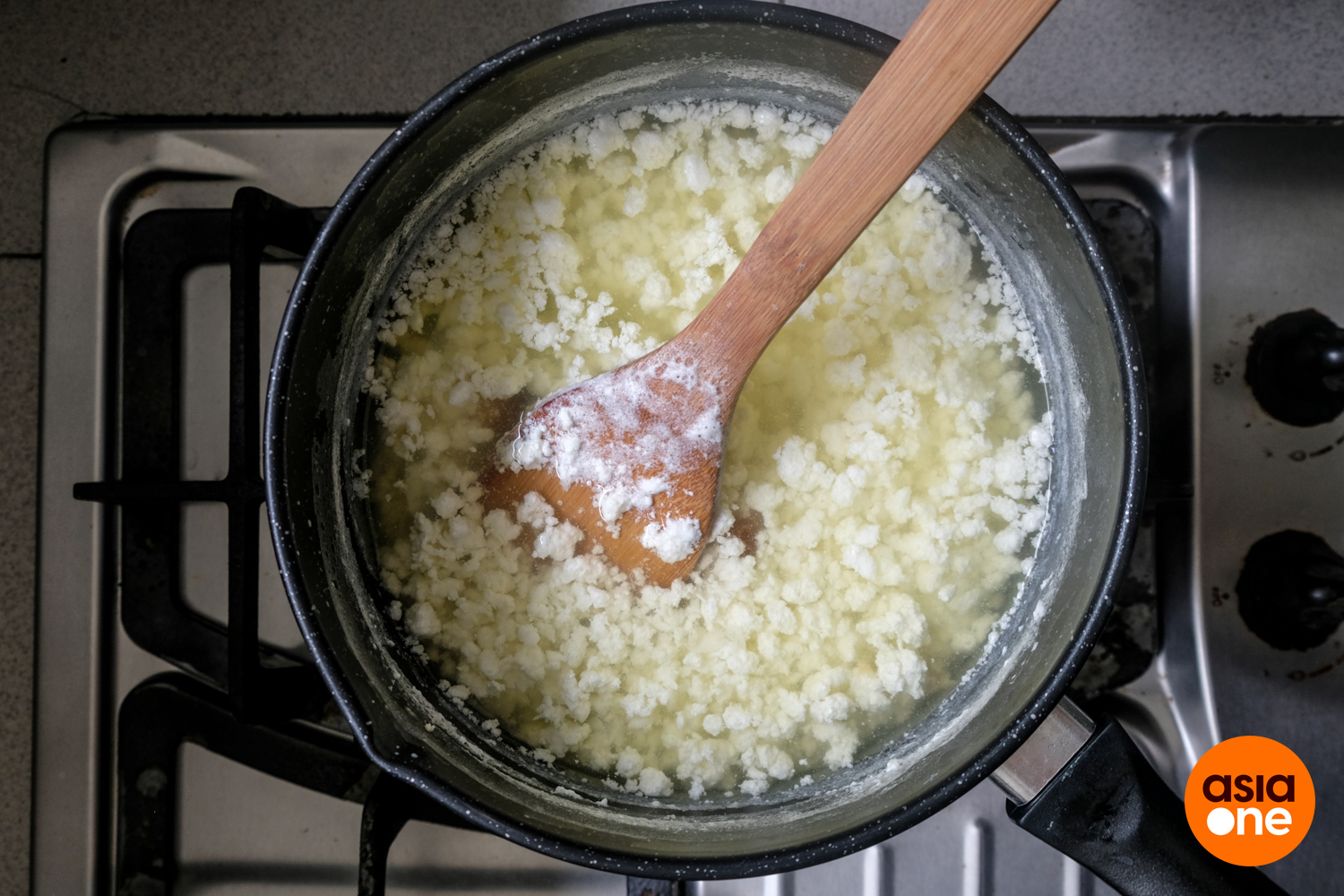 3. Place a metal sieve over a bowl and layer a cheesecloth on the top. if you don’t have a cheesecloth, any cotton fabric will do. For me, this happened to be a Good Morning towel. Strain the mixture by pouring it into the cheesecloth. Leave the mixture to drain and cool for 10 mins. 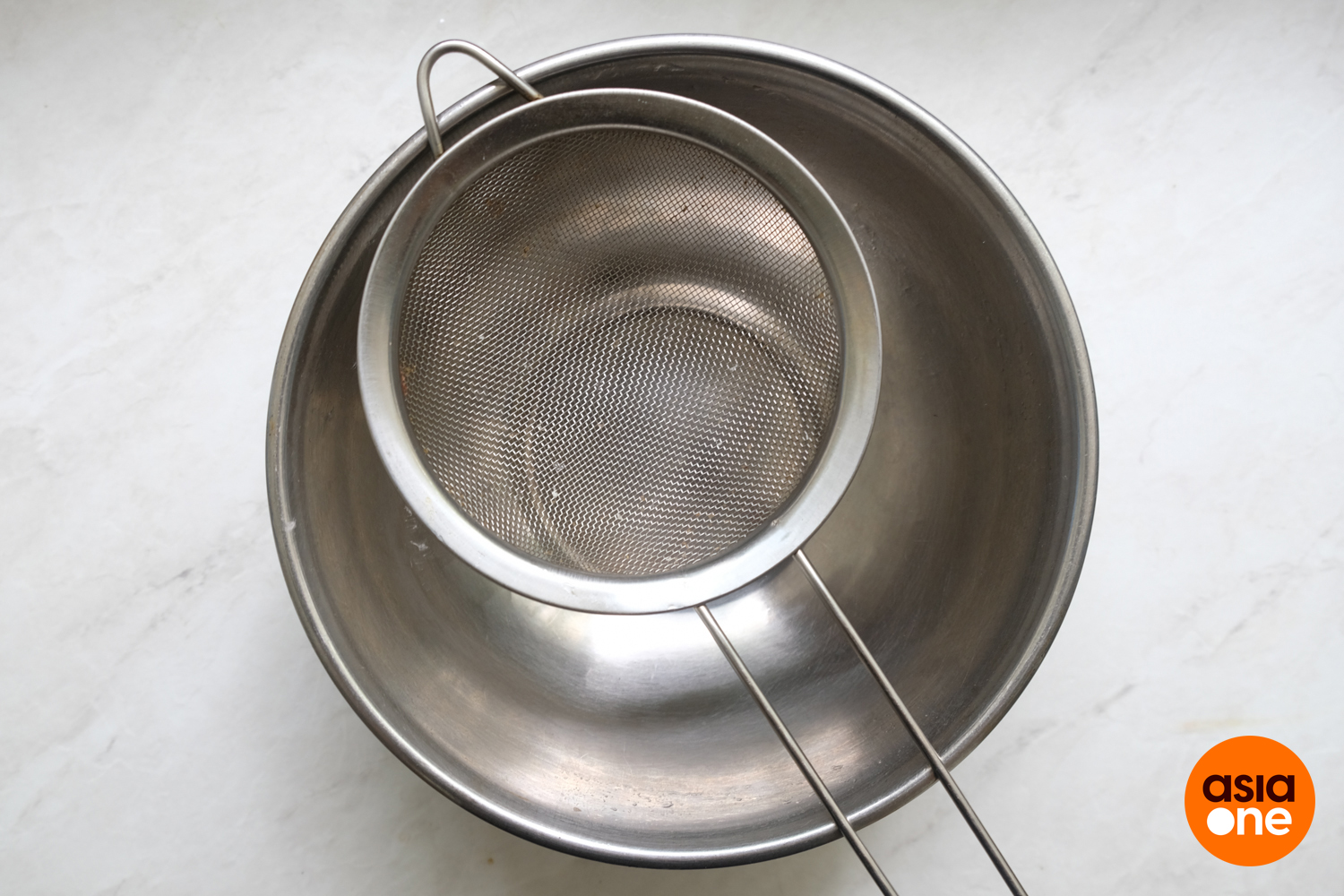 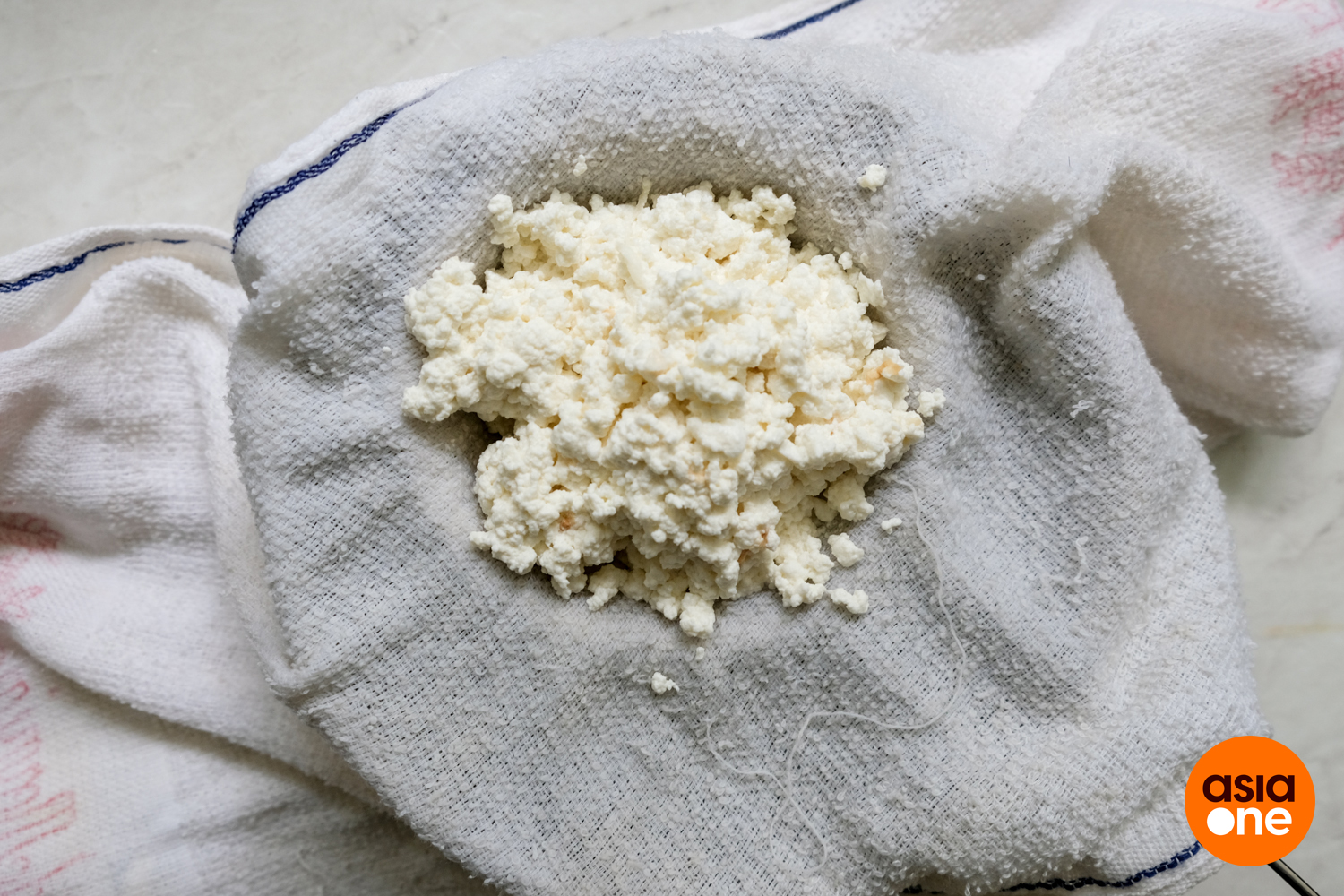 4. Give the curds a squeeze to drain out any excess liquid and add it to a food processor. Add salt and let your food processor do the work until you get a smooth and creamy mixture. This took me about 5 mins. Remove your cheese cheese from the processor. 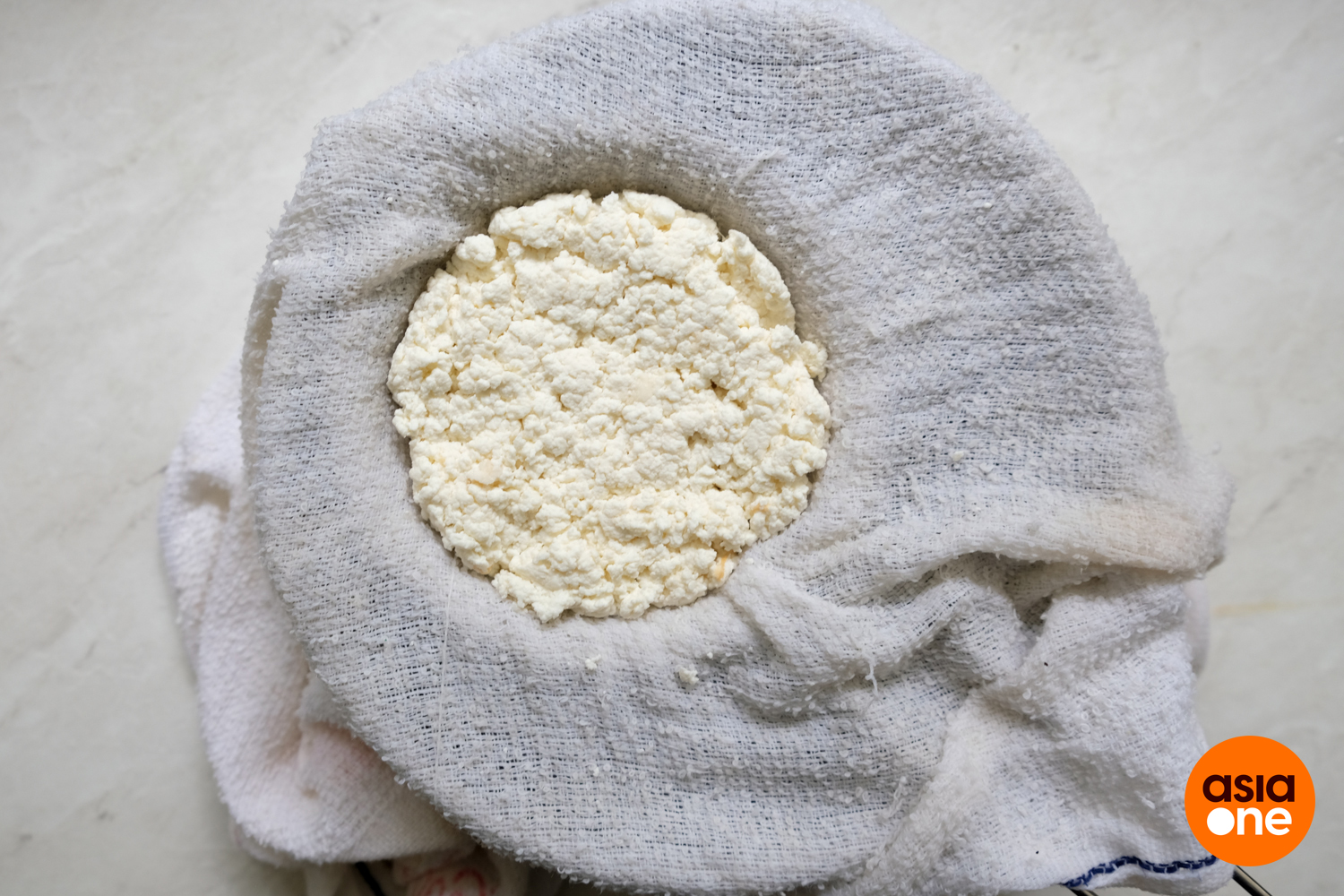 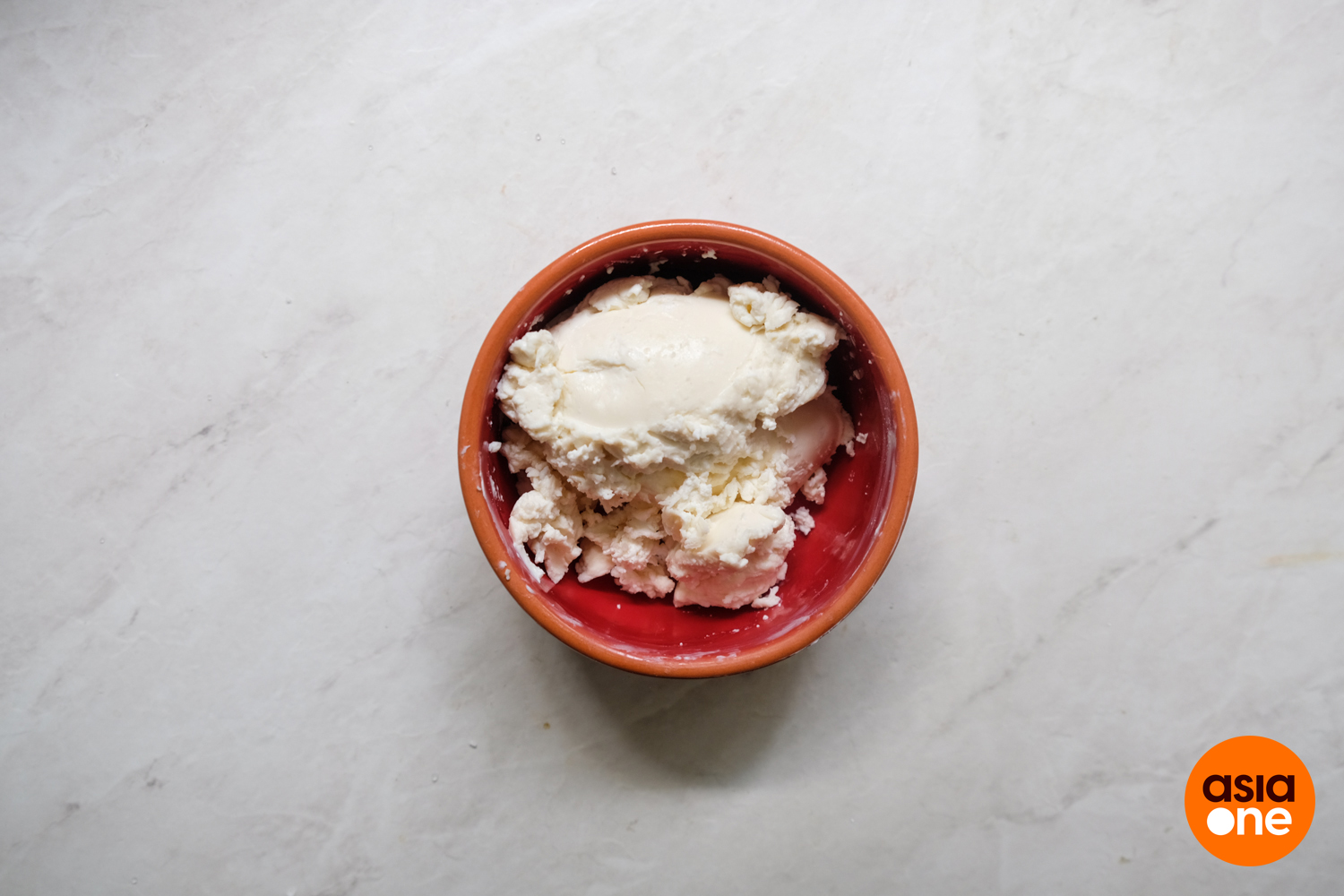 How is cream cheese made? DIY with using just whole milk and vinegar, and a makeshift cheese cloth. | Image: AsiaOne/Seow Kai Lun

Adapted from this recipe

1. Preheat the oven at 220 degrees Celsius. Cream the cream cheese and sugar together till mixture is fluffy and smooth. 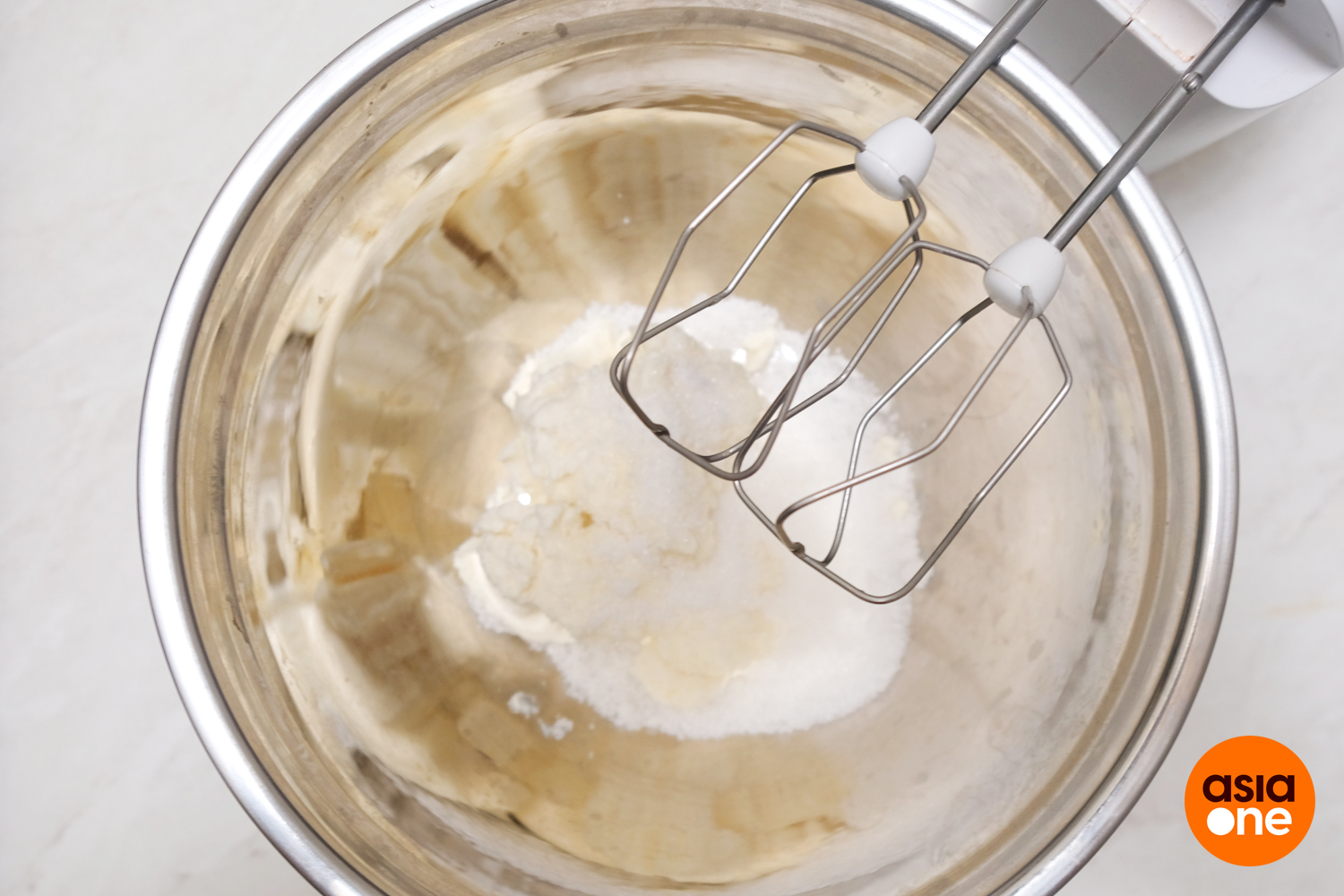 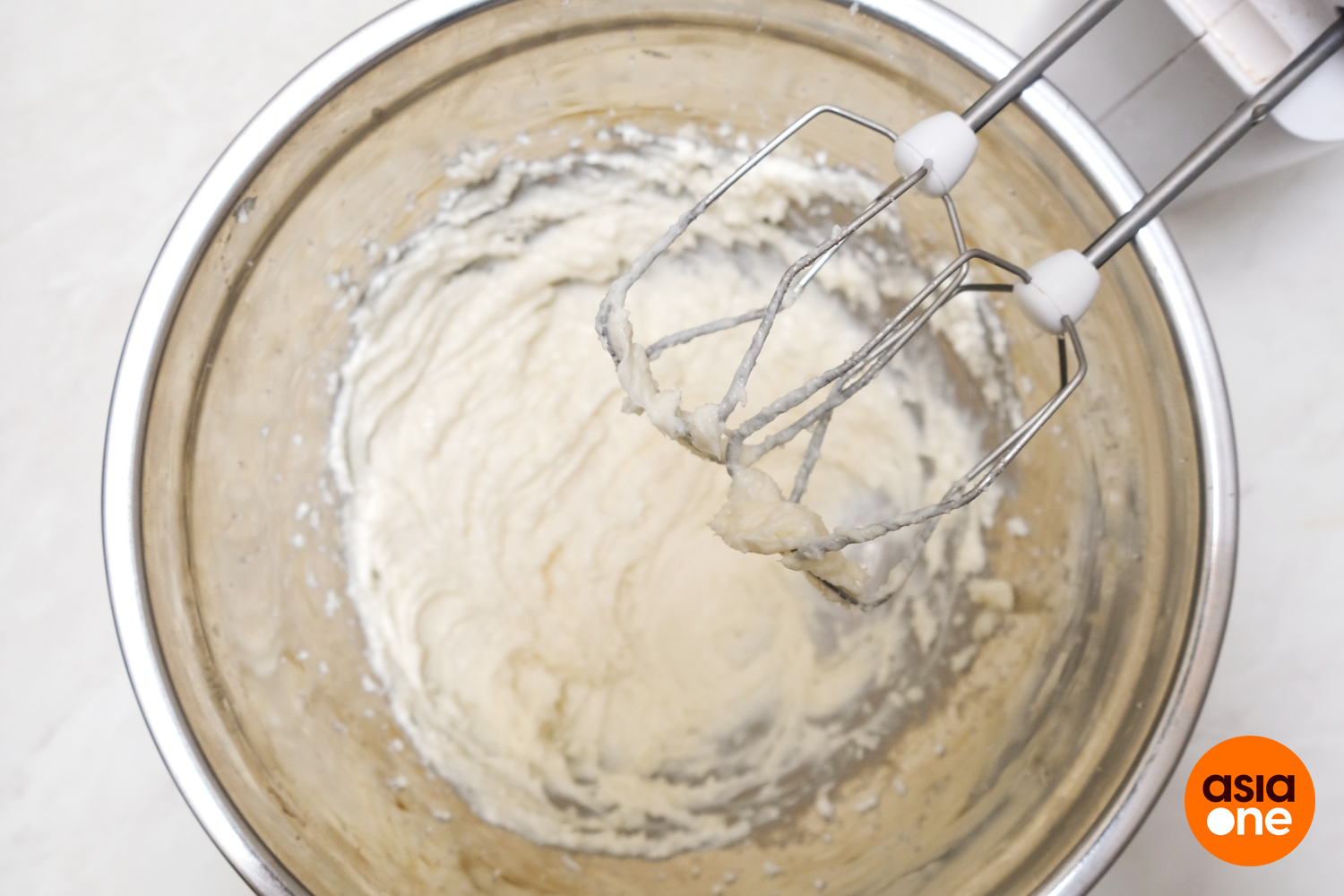 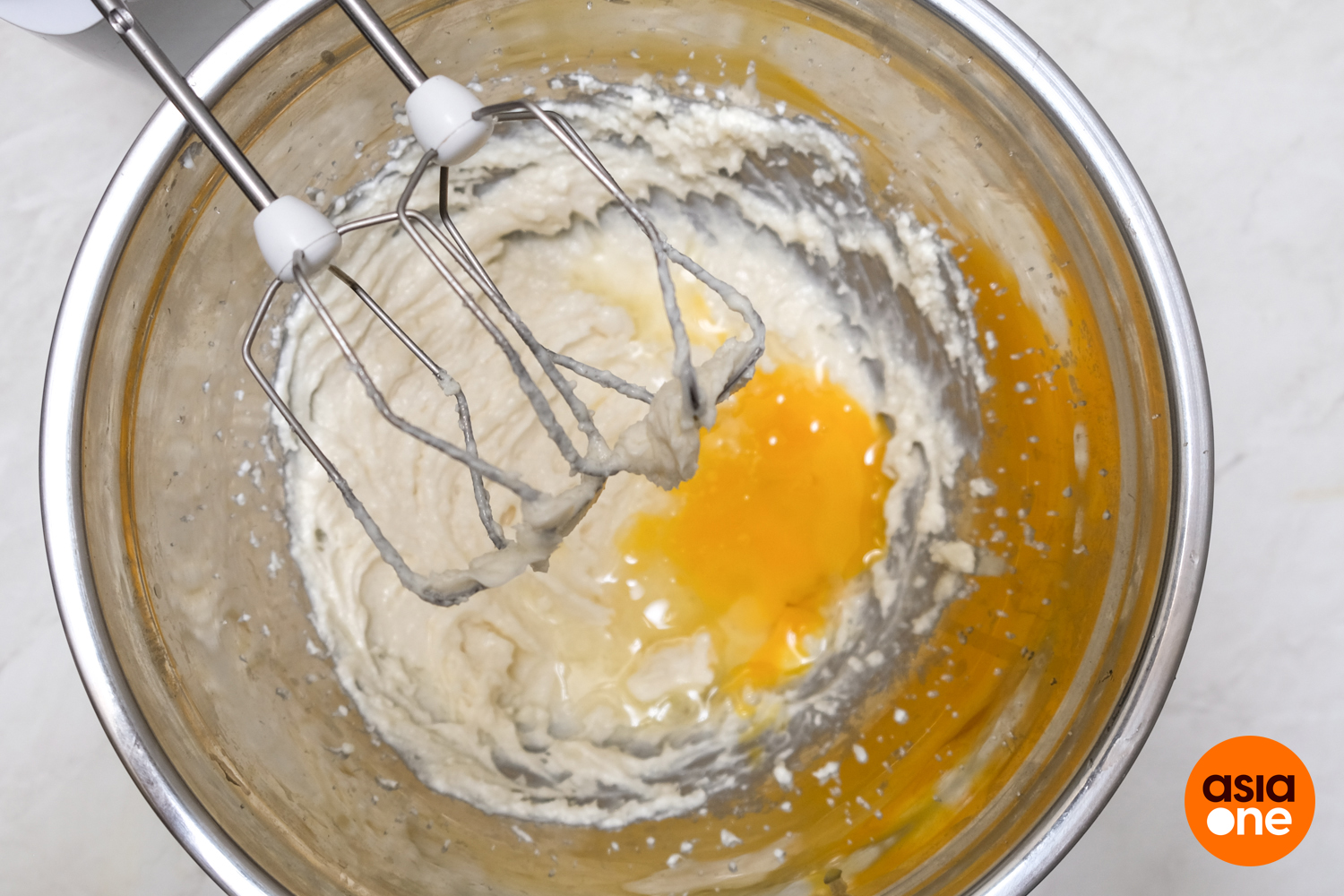 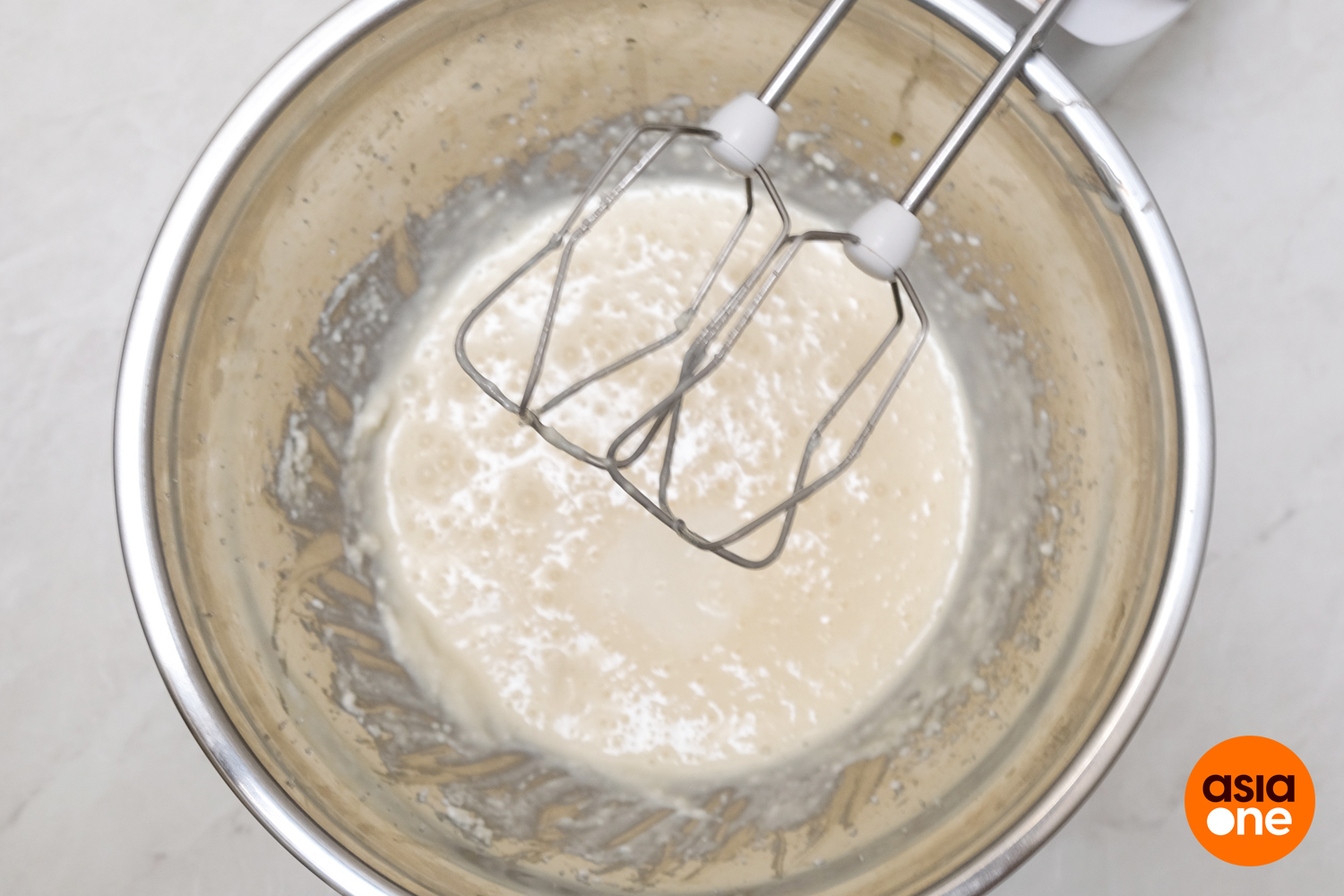 4. Shift flour into the bowl and fold into the mixture with a spatula. 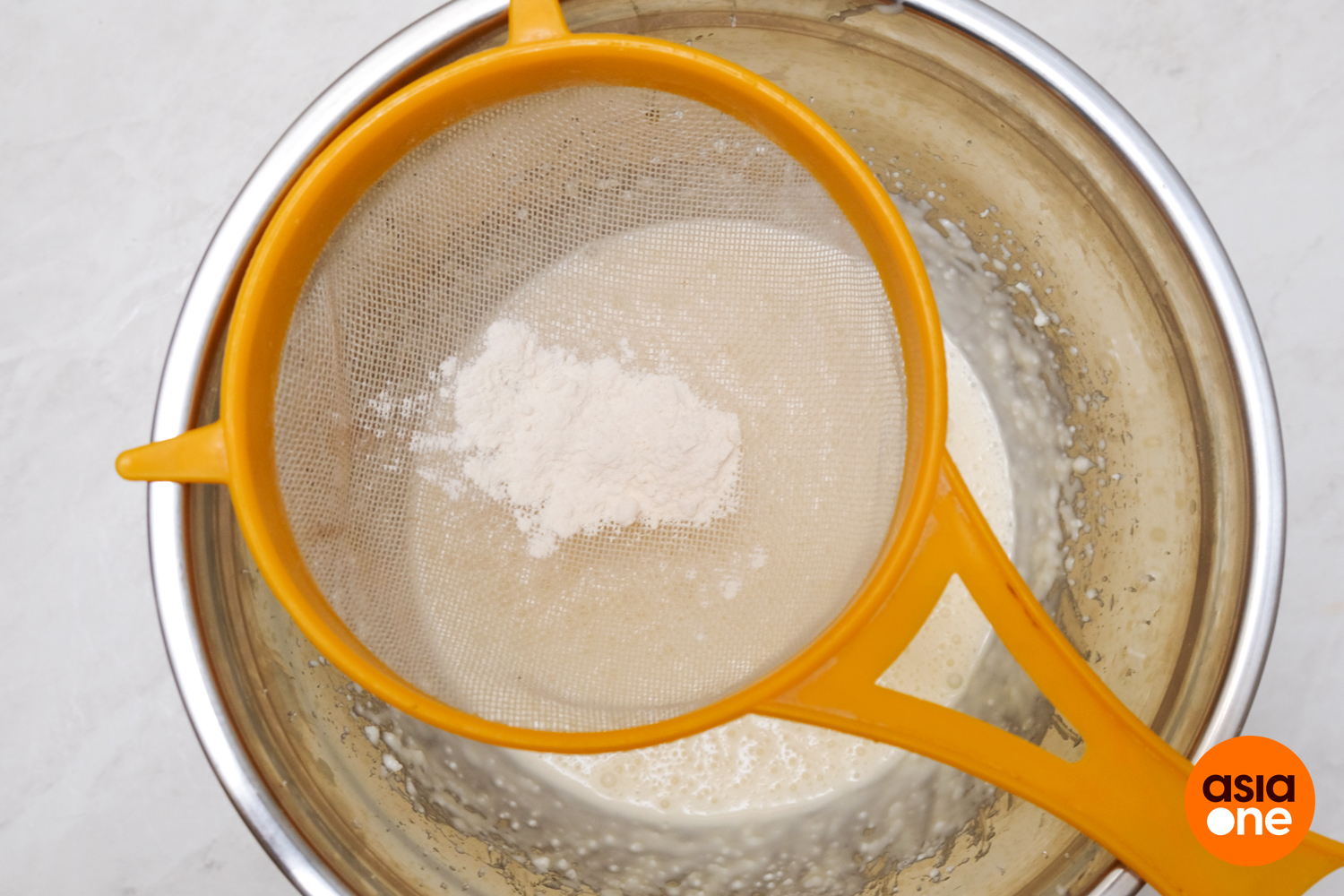 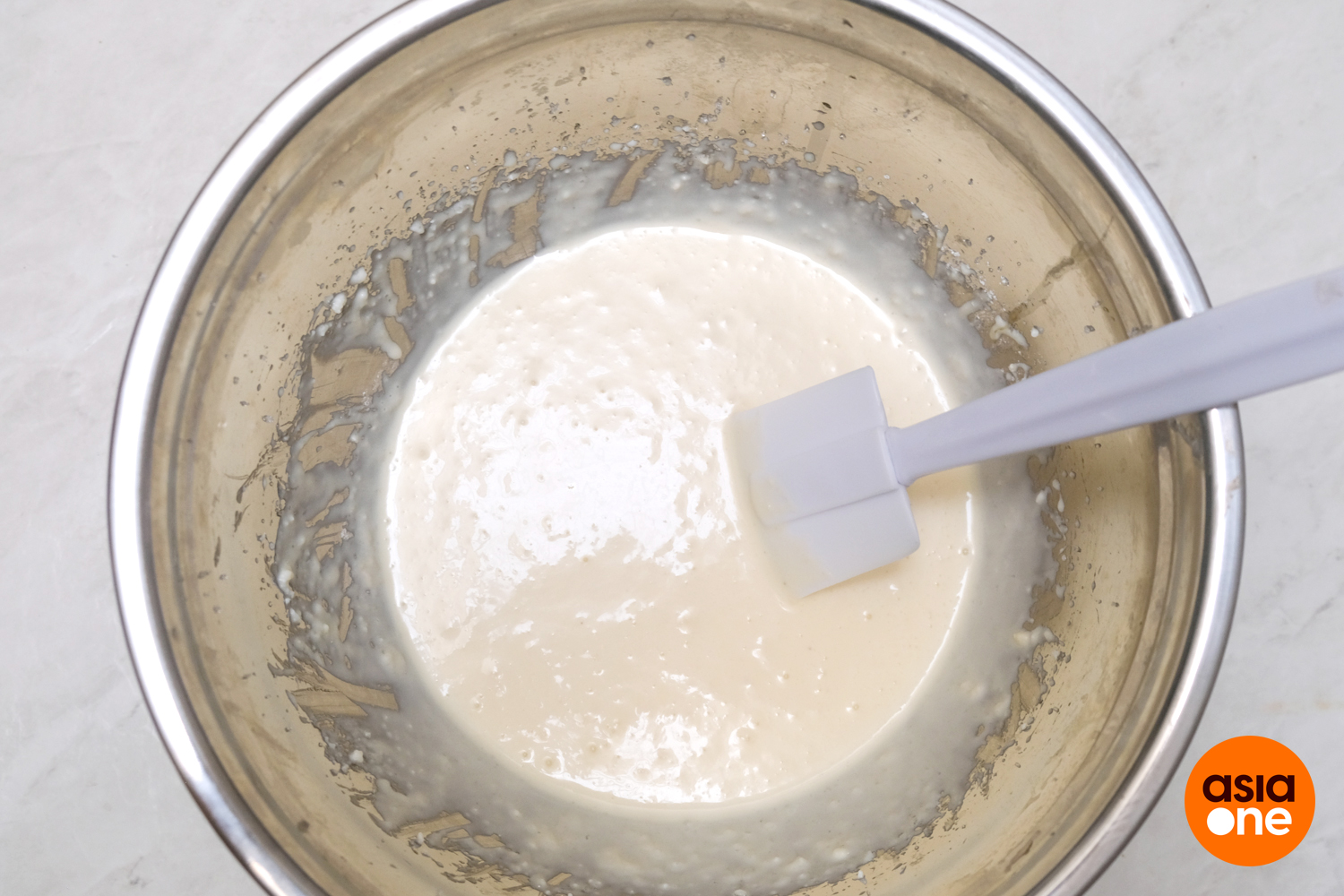 5. Pour mixture into a baking mould that is lined with two pieces of baking paper that have been pressed into the sides. The baking dishes I used were 11cm across and 5cm tall. Bake for 25 mins or until the top turns a deep brown. 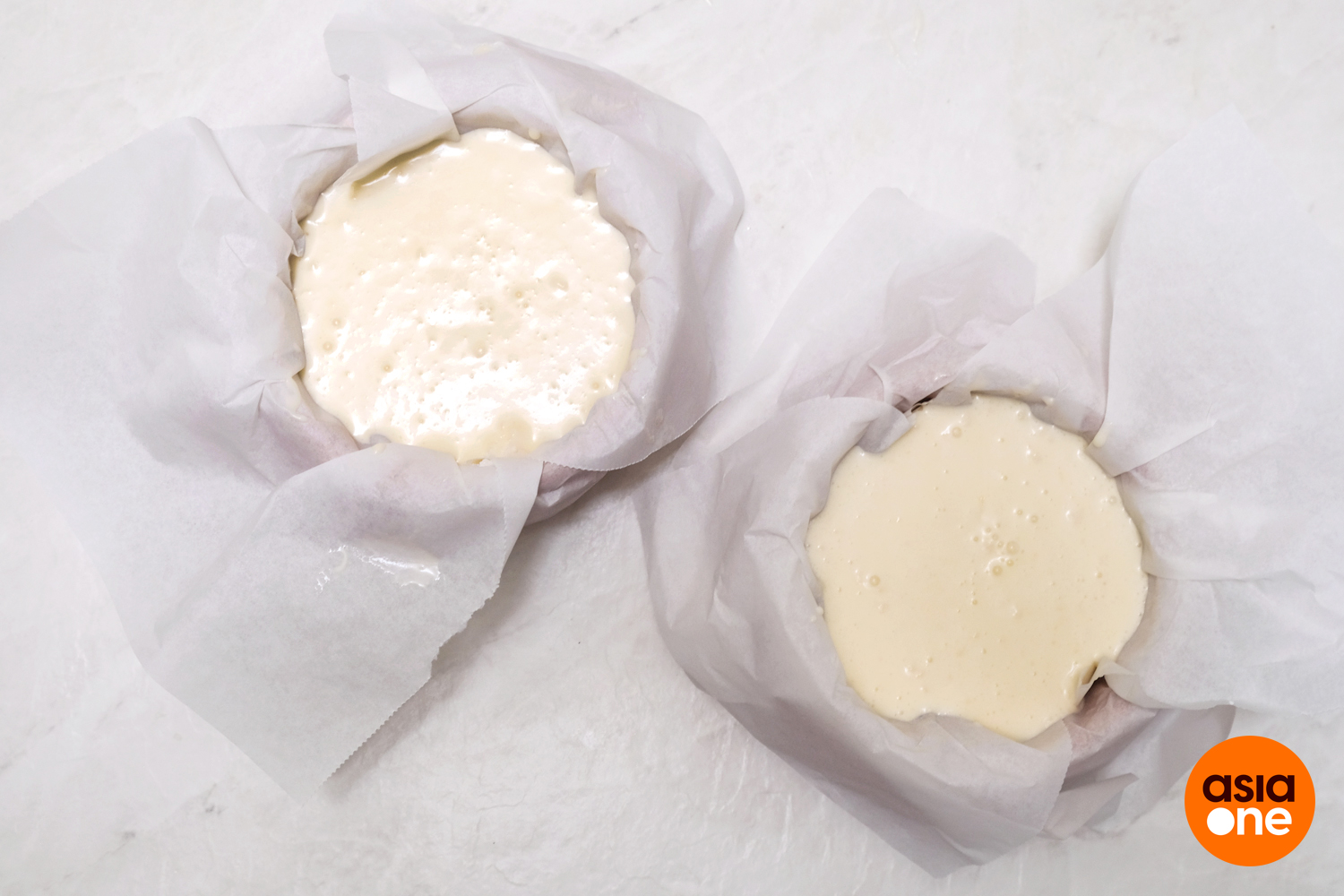 6. Leave the cheesecake to cool to room temperature before removing from mould and stripping away the baking paper. 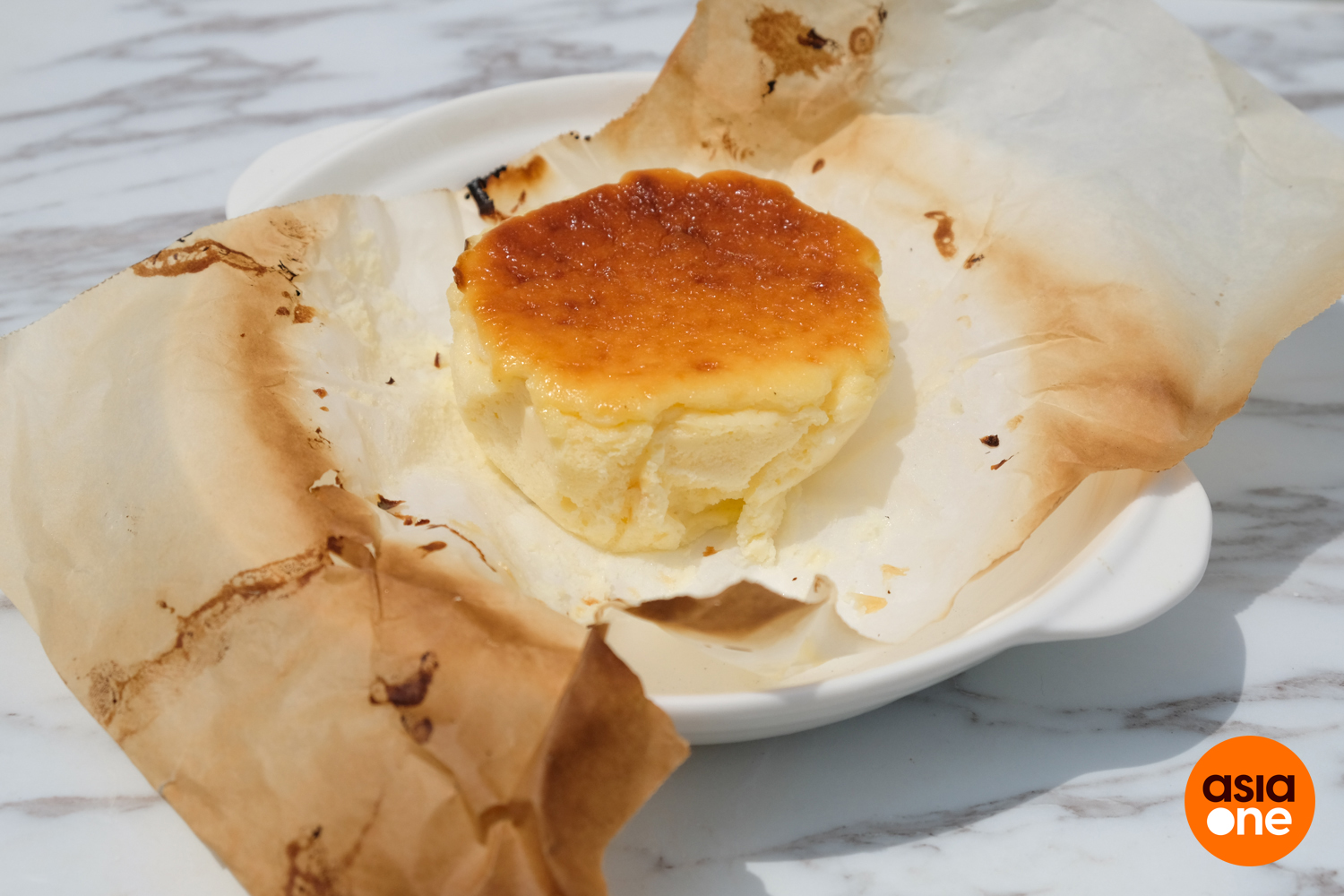 The verdict: It’s more effort but you get fresh cream cheese at a price that’s cheaper than buying it from the store
Let me do the math. One litre of milk produced about 140g of cheese cream and two litres of fresh whole milk cost $5.85.

And it would be cheaper if you didn’t use fresh milk. A carton of one-litre packs of full cream milk goes for $2.40 on RedMart.

And the looks and taste are comparable to the real deal.

That said, I got a smaller amount of cheese cream than I had expected from my milk as the original recipe said that you would get closer to 225g of cream cheese. Hence I had to do a second batch of cream cheese for my burnt cheesecake.

If using a Good Morning towel to strain the cream cheese mixture is not something you are comfortable with, there are other alternatives you can use, including a fine mesh bag, cotton pillowcase or coffee filter. Left: Homemade cream cheese, right: store-bought cream cheese
I did a blind taste test with my brother and his pick was the homemade version. And the cream cheese did well when used to bake the burnt cheesecake. 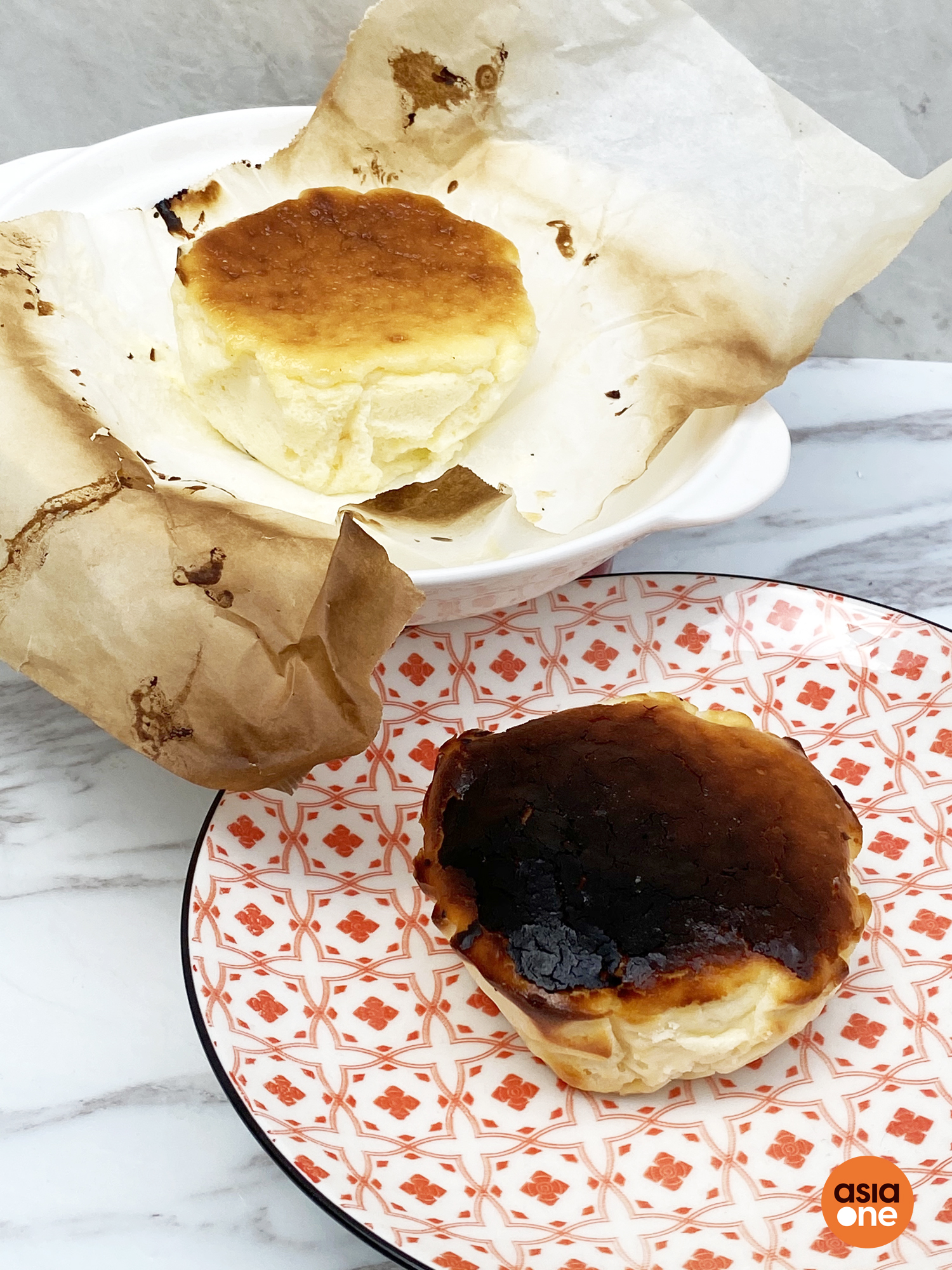 And you know a baking creation truly gets the thumbs-up approval when the cakes disappear from the fridge within the span of two days at home, without a sound.

Would I make my own cream cheese again? If I were to be honest, probably only if the stores run out of cream cheese again when I need it, or I need to use up the near-expiry date fresh milk that’s sitting in my fridge. Otherwise, in this case, convenience is king, and I would pay a bit more to get it off the shelves.

Make a Delicious Durian Crepe With This Simple Recipe