A mum has warned about the dangers of pencils, especially for toddlers, after her son fell with a pencil in his mouth. Read what happened here...

Little Thomas had just started to learn to walk when he fell and injured himself in an unimaginable accident.

The 14-month-old from Australia had fallen with a pencil in his mouth. The weight of his fall caused the pencil to become lodged in the roof of his mouth.

His mother Bri Skrypinski ran to his aid after hearing him scream. When she saw him he was already covered in blood.

“He had a pencil in his mouth…”: Mum’s warning about dangers of pencils 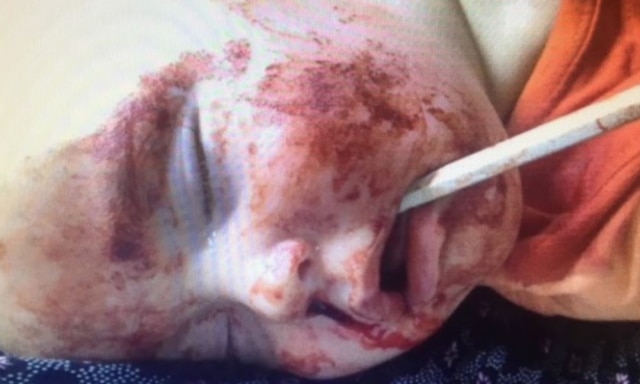 The pencil was lodged deeply into Thomas’ mouth. | Image source: The Courier Mail

Bri had no idea how to help her son with the pencil stuck so deeply so she instantly called the Queensland Ambulance Service emergency dispatcher.

“My son, he’s 14 months, he has fallen,” she told the authorities, according to The Courier Mail.

“He had a pencil in his mouth and it has gone right up into his plate (palate) and we cannot get it out, it is jammed. It’s bleeding everywhere.

“What can we do? It’s bleeding so badly – we can’t stop the bleeding.”

Bri recalls singing Twinkle Twinkle Little Star to comfort her son, while waiting for help, and travelling to hospital.

“That’s what we did until we heard those wonderful sirens which, you don’t really want to hear, but it was like magic,” she told the publication.

Thomas was quickly transported to hospital via ambulance and moved into surgery where it was discovered the pencil had fractured his eye socket and missed his optic nerve by millimetres.

After a two-hour surgery, and five days in hospital, he was discharged from hospital. Thomas was treated in hospital after falling and lodging a pencil (right) in his mouth. | Image source: The Courier Mail.

The accident, which happened on November 26, 2016, left Bri shaken. But the remarkable way it was handled by the medical teams stayed with her forever.

Bri recalled it was a “nightmare” ordeal but it could have been much worse with the opthamologist telling them Thomas was very close to losing his eye and he was lucky for it to have missed his brain area.

Bri, her husband Rob and Thomas visited Mudgeeraba ambulance station on Tuesday to thank paramedics Adrianna Barnes and Clint Peters, who assisted them.

Thomas now has to wear glasses but has otherwise made a full recovery. This article was republished with permission from KidSpot. (Featured Image: File Photo)

Also READ: Chopstick pierces toddler’s skull after she falls onto it while running around at home