Cystic Fibrosis in Babies: What Parents Need to Know

Babies are sensitive to every little change in the first few months of life. And parents need to be extra careful when it comes to every little detail right from diapers, clothes, soap, to even their own food choices.

You never know what may disagree with your child’s health and trigger problems for the little one. This is particularly the case with food choices, especially when you shift from breast milk or formula milk to solid foods. Even then some babies can develop gastrointestinal issues that will give them tummy aches and more.

However, some babies may face gastrointestinal issues due to cystic fibrosis, as per new research. It suggests that cystic fibrosis in babies could be a reason for stomach problems in infants in the first year after birth.

This is a genetic disorder that causes damage to the body’s organs including the lungs and the digestive tract.

If your baby is crying too often due to tummy aches, it could be cystic fibrosis in babies’ symptoms.

What Is Cystic Fibrosis?

Cystic fibrosis (CF) is an inherited illness. It may result in lung damage, infections, and breathing issues.

A defective gene that is inherited causes CF by preventing or changing how sodium chloride, or salt, enters and exits cells in the body. A heavy, thick, sticky mucus develops as a result of this immobility and can block the lungs.

The disorder is a defective gene that makes the body’s natural lubricants like mucus, sweat and digestive juices become thick and sticky. When mucus builds up in the digestive system, it blocks tubes in the pancreas and even an organ in the tummy. CF also makes it difficult for the baby’s digestive system to break down food.

When the body is unable to break down food, it’s not able to get the required nutrients either, which the infant needs to stay healthy and grow as per their age.

CF can also affect the lungs due to thick mucus that can block airways and cause breathing problems and infections in the lungs. The disorder can cause severe damage and can sometimes be deadly as well.

How Is Cystic Fibrosis Inherited?

The cystic fibrosis transmembrane conductance regulator (CFTR) gene, which has a malfunction (mutation), alters a protein that controls the flow of salt into and out of cells. As a result, the reproductive, digestive, and respiratory systems produce thick, clingy mucus, and sweat contains more salt.

Gene faults can take many different forms. The severity of the illness is correlated with the type of gene mutation.

What Are The Signs And Symptoms Of Cystic Fibrosis

Cystic fibrosis symptoms vary. The severity of the disease can greatly impact your child’s symptoms. Some children may not experience symptoms until they’re older or in their teens.

The tubes that carry air into and out of your lungs get clogged with the thick, gummy mucus associated with cystic fibrosis. Signs and symptoms of this include:

• coughing or wheezing, frequently with little to no physical effort

• unable to play or exercise without getting tired quickly 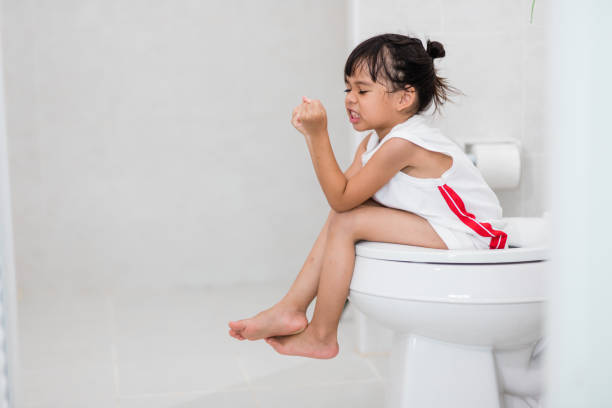 The digestive enzymes that are sent from your pancreas to your small intestine can become obstructed by the thick mucus. Your intestines can’t fully absorb the nutrients in the food you eat without these digestive enzymes. The outcome is frequently:

Screening for CF is often performed on newborns. Chances are the disease will be caught within the first month after birth, or before you notice any symptoms.

Babies will be diagnosed with cystic fibrosis usually in the first month after birth. And the earlier you find out, the faster you can begin the treatment.

Partner Stories
4 Good Toilet Hygiene Habits for Kids to Have Early in Life
Flu in Singapore: Is Your Family Protected?
6 Top Ways to Prevent Diaper Rash
Here’s Why Your Child’s Gut Health is Important 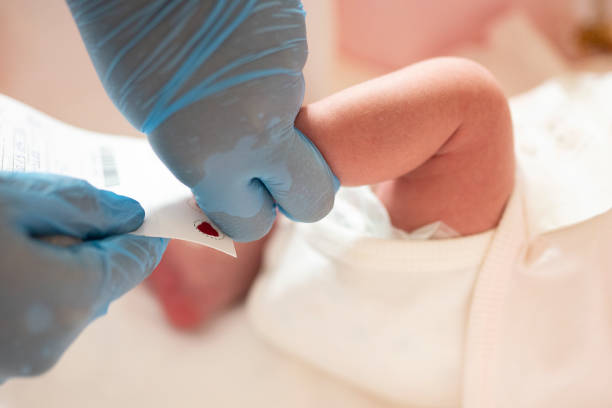 Newborns are frequently screened for CF in the US. A quick blood test will be used by your child’s doctor to establish an initial diagnosis. They’ll draw blood to check for elevated concentrations of the chemical immunoreactive trypsinogen (IRT).

The first thing your doctor will want to do is rule out any further complicating reasons if the test findings show higher-than-normal levels of IRT. For several months after birth, for instance, some preterm neonates have increased IRT levels.

A follow-up examination can support a diagnosis. A sweat test is what is known as here. A medicine that causes an area on your child’s arm to sweat will be given by the doctor during the sweat test. The doctor will then collect a sample of perspiration. Sweat that is saltier than it should be could indicate CF.

Your doctor can suggest that your child undergo a genetic test if these tests are inconclusive but still support a CF diagnosis. It is possible to extract a small amount of DNA from blood and test it for the existence of the mutant gene.

There’s still a lot of research needed around CF and its effects on babies, and the new study states that infants run the risk of developing stomach ailments in just a few months of life.

The study was published in the Journal of Pediatric Gastroenterology and Nutrition. Researchers considered 231 babies diagnosed with cystic fibrosis during the newborn screening.

They followed the infants for their first year of life and recorded any hospitalisations, which were a result of gastrointestinal issues.

Out of the total participants, about 61 babies were taken to the hospital at least once over a period of 12 months due to gastrointestinal issues.

The data from the study allowed researchers to identify certain factors that made babies with cystic fibrosis more susceptible to stomach problems.

Researchers hope their findings will help medical professionals to identify cystic fibrosis in babies, who are more at risk of gastrointestinal issues.

Doctors can then take measures to prevent the effects of CF that may cause stomach ailments.

At present, doctors prescribe babies and children with cystic fibrosis with medicines including:

Complications of Cystic Fibrosis in Babies

Many CF patients can lead happy lives. However, the symptoms could get worse as the illness does. Hospitalisations could become more common. Treatments could stop working as well over time at lessening symptoms.

Common CF side effects include:

A thick mucus produced by CF is a favourable environment for the growth of bacteria and fungus. People with CF frequently experience pneumonia or bronchitis flare-ups.

People with CF frequently have the damaging respiratory disorder bronchiectasis. It is more difficult to breathe and clear the heavy mucus from the airways when you have this illness.

The digestive tract may struggle to adequately absorb nutrients if you have CF. Deficits in nutrition may result from this. Your youngster could experience problems if they don’t get enough nutrients.

Can You Prevent Cystic Fibrosis in Babies?

You and your partner may decide to undergo genetic testing before having children if you or your close relatives have cystic fibrosis. Your chance of having a kid with CF can be assessed by the test, which is carried out in a lab using a sample of blood.

Your doctor can perform further tests on your unborn child if you are already pregnant and a genetic test indicates that your unborn kid may be at risk of developing cystic fibrosis.

Not everyone should get genetic testing. Before deciding to undergo testing, you should discuss the potential psychological effects of the results with a genetic counsellor.

When To See A Doctor About CF

Consult your doctor about getting tested for the disease if you or your kid exhibit symptoms of cystic fibrosis or if someone in your family has the condition. Consult a medical professional who is familiar with CF.

Your doctor must be followed up with consistently and regularly, at least every three months, if you have cystic fibrosis. If you notice any new or worsening symptoms, such as more mucus or a change in the colour of your mucus, fatigue, loss of weight, or severe constipation, speak to your doctor right once.

If you experience severe stomach discomfort and distension, chest pain, difficulty breathing, or are coughing up blood, get immediate medical attention.

Once a kid is diagnosed with CF, they will require ongoing treatment. The good news is that, after getting training from the doctors and nurses who care for your kid, you can give the majority of this care at home. Additionally, you’ll need to occasionally go to a CF clinic or the hospital as an outpatient. Occasionally, your child may need to be hospitalised.

Your child’s treatment plan may include different drugs over time. To keep track of your child’s responses to these medications, you’ll probably collaborate closely with the treatment team. There are four types of CF treatment.

Any infection can be treated with antibiotics. Some medicines may be able to assist in clearing the digestive and pulmonary mucus in your child. Some people can lessen inflammation and perhaps stop lung damage.

A kid with CF must be shielded from other illnesses. Keep up with the recommended vaccinations by working with your child’s doctor. Make sure your youngster receives an annual flu shot, as well as everyone else who comes into regular contact with them.

A few methods can aid in removing the thick mucus that may accumulate in your child’s lungs. Clapping or cupping your child’s chest one to four times a day is a typical practice. Some folks utilise vibrating mechanical vests to assist break up mucus. Treatments for breathing may also assist lessen mucus accumulation.

A number of lifestyle treatments could be a part of your child’s overall care. These are intended to support your child’s recovery and maintenance of healthy functions, such as play, exercise, and breathing.

CF can be a cause of weight gain or slow growth in a child. The latter being a common issue. In such cases, doctors prescribe special medicines for the baby that will help the body get nutrients from food.

These medicines help with weight gain and digestion. At the same time, parents need to ensure the child eats high-calorie meals with extra vitamins A, D, E, and K.

You may also want to refer to a professional dietician who could help you create a special meal plan for your child.