New Research Reveals the Names of People Who Complain the Most

I want to speak to your manager! | Image source: iStock

Names of People Who Complain The Most

UK comparison site Uswitch decided to conduct their own research into complainers and they did that by looking at the Trip Advisor reviews for popular tourist destinations around the world.

They found the Eiffel Tower took out the most complained landmark with people spending over 402 hours (or 17.5 days) writing over 17,000 negative reviews about it (sacré bleu!)

And even our beloved Opera House in Sydney copped some heat, with 300 negative reviews.

The site counted up the most common names that appeared by the complaints and here’s what they found. 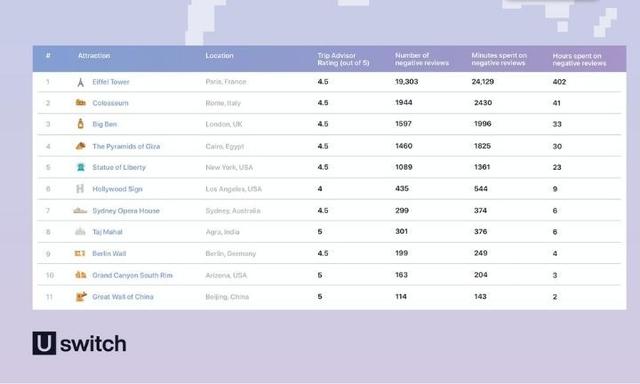 The most complained about landmarks on Trip advisor. | Image source: Uswitch

They may not officially be the biggest complainers, but the stigma surrounding the name Karen has caused its popularity to plunge in recent years. Babynames.com announced earlier this year that none of their millions of website users had added the name Karen to their favourite baby names list and in the past decade, there has been a 75 per cent drop in the number of baby girls being named Karen.

While some feel like the meme, and the associated bleached bob hairstyle are all just a bit of fun, many people are concerned that the Karen trend is really just an excuse for misogyny, particularly as there is no male equivalent to a ‘Karen’.