Let’s start by saying mums and dads can both teach their kids important skills. And whether our kids are male, female or anywhere in between, they’re bound to benefit from some good old fashioned life skills.

In fact, it was my stepdad who taught me how to tie my own tie (on the bedroom door handle) when I changed schools to one requiring a tie at age 14.

It was then a close female friend who taught me how to change a tyre after I got my first car, and after the next several years, Google taught me pretty much anything else I needed to know.

But there’s a dad out there, who’s taken on the role of stand-in father figure to countless kids around the world by way of his YouTube channel, Dad, how do I? Essential life skills list: not quite at shaving stage of iso myself… | Image: YouTube/Dad, how do I?

Essential Life Skills List: “‘How To’ videos by a dad who has raised 2 adults”

According to his YouTube Channel, Rob Kenney provides “‘How To’ videos by a dad who has raised 2 adults (and we still talk).”

He says, “I will do my best to provide useful, practical content to many basic tasks that everyone should know how to do. I will release a new ‘How to’ video every Thursday. I am planning to start ‘Tool Tuesday’ May 26th, where I will go over a tool a week to help you complete your tasks.”

So far, Rob channel has racked up over 1.87 million subscribers and has 14 instructional videos so far.

Rob shares step by step instructions on everyday tasks like how to tie a tie and how to shave your face (thankfully I’m not quite at that level yet, but I’m not far off!), to tricky ones like how to use a stud finder or how to hang a shelf.

To date, Rob’s most popular video was one where he says thank you for all the wonderful messages of support he’s received over the last few weeks. In the video, which was only uploaded five days ago, he marvels at having “over 400,000 subscribers” – now he’s nearing the illustrious two million and we think he’ll get there in no time!

“My goal in my life was to raise good adults”

There’s also a Facebook page set up where Rob shares his videos and he’s since gone viral on reddit and TikTok.

But the really interesting thing (and quite sad when you come to think of it), is the story behind Rob’s life that inspired his idea.

At the age of 14, Rob was taken in by his older brother after his father decided he no longer wanted his eight kids.

“He said, ‘You know, I’m done having kids… You’re going to have to figure out where these kids are going because otherwise I’m putting them in foster homes’,” Rob told Shatteredmagazine.

But all these years later, with grown children of his own and all that isolation time on his hands, Rob just wanted to give back. 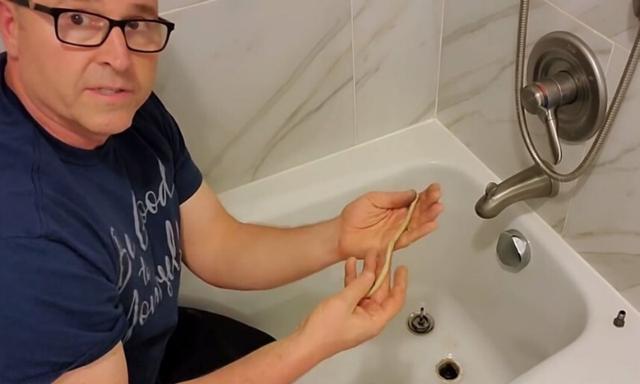 Essential life skills list including unclogging the bathtub or even the sink. | Photo: Wait, isn’t a bath the same as unclogging a sink? | Image: YouTube/Dad, how do I?

“I can’t thank you enough”

On his most recent video, Rob shared a dad joke to say thank you, and people commented saying just how grateful they are for what he does.

“It’s great to see wholesome content get attention for once,” wrote one person.

Another added, “I can’t thank you enough for doing something so amazing and selfless. My son is 16 and his father has never been in his life. I try to teach him all I can, but sometimes it’s better and easier coming from a man.”

“My dad died two years ago and there are some things I never learned how to do from him because I thought I’d always just be able to call and ask anytime,” wrote another. “I’m a grown woman with a husband and child, but can always use this kind of fatherly wisdom for daily tasks! Thank you.”

And this mum says she’s found it helpful for herself: “I know this says it is for teens, but I use them too! I am a 33-year-old single mother with no family here. I need to know how to do some of these things too! Keep going!”

Bravo Rob and well done! Your channel proves there really are some wonderful people out there.

*brb* gotta go figure out why unclogging a sink is different to unclogging the bath!

Lead image via screengrabs from YouTube/Dad, how do I?