Much has been said about the saga of home-based bakers versus Ateeqah Mazlan, the 30-year-old actress-turned-influencer who stands accused of ratting them out to the authorities.

You can read the explainer here involving Actress Ateeqah Mazlan, but in case of TL;DR…

Now that you’re all caught up, here’s what ensued last night (April 28) when Ateeqah came on board a Facebook Live session hosted by prominent Malay vlogger, Sujimy Mohamad.

Though it seemed that her appearance would be a huge, major part of the show, the actress was only on screen for a little over 10 minutes out of the one-and-a-half-hour duration. Ateeqah appeared after the 11-minute mark of the video, where she gets grilled by Sujimy on the controversy.

The actress did make an apology to affected parties from the get-go, claiming that her intention to call the authorities was to clarify the rules for home-based businesses as she wanted to start one herself.

“I didn’t expect the video to go as viral as it did. It went out of control. But no matter what, I’d like to apologise,” she said.

“In the past few days, I’ve read through all the comments and it made me realise that my presentation could have been better, whether it was my intonation or the way I made my video. Regardless, I’d like to say I’m sorry.”

The actress expressed regret that she did not think it through before uploading her video onto Instagram TV, having initially believed that the faster she uploaded her findings, the faster people would be aware of the rules and avoid getting fined.

Actress Ateeqah Mazlan also clarified that the enquiries she made with the authorities were because she simply wanted to find out for herself if she could sell brownies from her home to make some additional income during Ramadan.

“I didn’t call HDB to complain about home-based businesses — I did it for my own knowledge and to help others. I posted it on IGTV to share what I learned with my followers so that they can be up to date with the rules and can be responsible business owners,” she explained.

She left the chat before Sujimy invited home-based business owners into the discussion.

Since her apology, it’s been a mixed bag of reactions on social media towards Ateeqah, with some accepting her clarifications and wanting to move on. 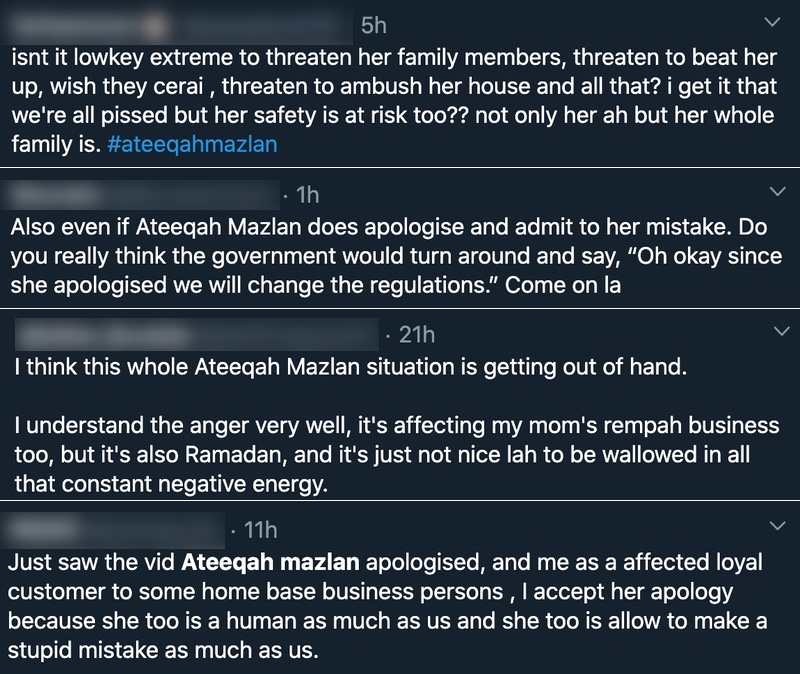 Others refused to believe her words and made it pretty clear during and after the course of Sujimy’s Facebook Live show. 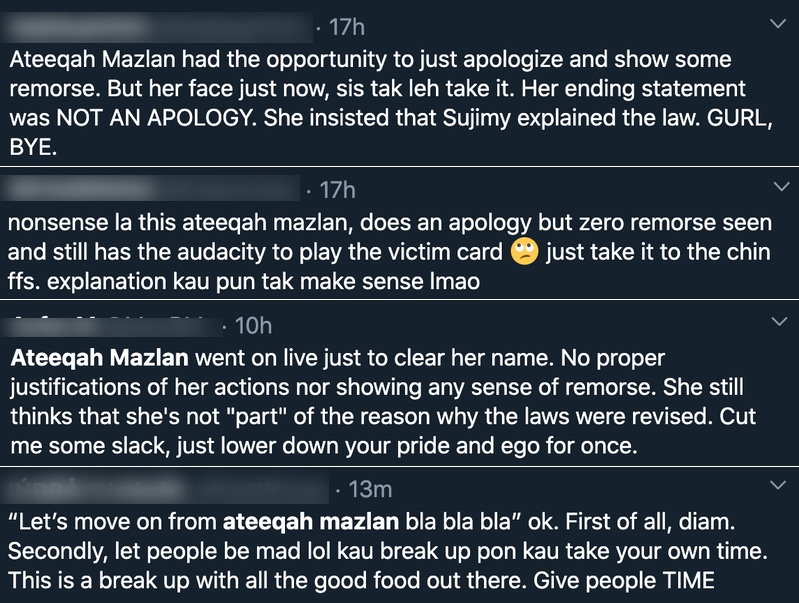 Meanwhile, Minister for Environment and Water Resources Masagos Zulkifli has chimed in with his thoughts on the issue, namely how it would be “irresponsible” for home-based food operators to pressure the government into making exceptions for them during the circuit breaker.

“They are purportedly fighting for the rights of the entrepreneurs but in fact, they’re only rubbing more salt into their wounds — because they know the government cannot make exceptions to any sector affected in the [circuit breaker] period,” he wrote on Facebook.

He urged stakeholders to adapt and make sacrifices for “the sake of all” and not let “personal interests dictate our actions”.

“Be patient. When things get sufficiently better for our health authorities to advise the lifting of restrictions, we will allow our barbers and HBB to go back to do their business.”

Drop in COVID-19 Infection With 528 New Cases; Only 8 Are Singaporeans and PRs